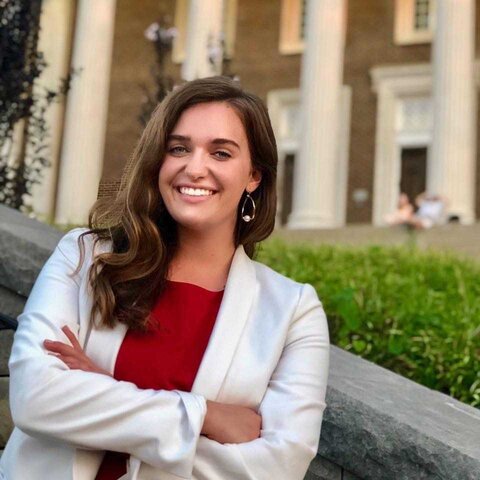 MJ Mayo, a senior from Henderson, KY, recently had the opportunity to co-author a grant with fellow Political Science major Dawson McCoun under the supervision of Dr. Joel Turner. Mayo is a double major in Political Science and Professional Writing with a minor in Citizenship and Social Justice. The grant, Feed the Need: Addressing Food Insecurity at WKU, received $10,000 from the WKU Sisterhood and focused on helping students, both on and off campus, have better access to the food that they need.

“Food insecurity is a really common [issue on campus], but it’s also very hard to address because of the invisibility of the nature of it sometimes. No one wants to admit that they’re hungry,” explained MJ. “Sometimes it’s as casual a conversation such as, ‘Can I bum a swipe off you?’ But for a lot of students, for our more disconnected students, that’s really not always necessarily the easiest thing to do.”

MJ built her proposal for this grant based on a project she was working on in Dr. Jeffery Rice’s grant writing course. Mayo explains that, initially, she and McCoun were going request funding from The Student Government Association. Mayo is the SGA Senator for Potter College of Arts and Letters; however, they were able to receive a larger budget through the WKU Sisterhood. The WKU Sisterhood is a group of women dedicated to philanthropy on campus who pool funds to donate to WKU affiliated projects that benefit the university community. Last year, they awarded $62,920 in grants to fund six different WKU projects.

“Go big or go home is what we decided, and it paid off really well,” said MJ, and from the $10,000 they were able to receive, it seems like it has. Of the $10,000 budget, $6,000 was spent on 1,000 meal vouchers that can be used at Fresh Foods. The vouchers were placed around campus for students to grab free of charge with no questions asked. The remaining $4,000 was meant to be used for the purchase of more dorm friendly foods to stock at the WKU Food Pantry over the course of the Spring semester. Unfortunately, due to the COVID-19 campus-wide shut down in March 2020, funds for this project were frozen before they were able to meet that second goal. Their team is currently in talks about how to revise their spending plan to make the most of the money given the pandemic.

“We’re in a very peculiar situation in which we think we’re here for a while, but that’s not a guarantee.” She later added, “It’s both my greatest accomplishment, and it feels like my greatest disappointment too because of the way that we got halted. I had such great aspirations for being able to see this through, and I know I still will, but it’s bittersweet. How much work we put into this and how much an impact we know it can make on campus, but it’ll be a modified impact.”

MJ said that her time as an English major in the Professional Writing concentration really helped prepare her for this experience through the things she has learned and the faculty she was able to work with.

As for a future in grant writing, MJ said, “I really liked doing it, specifically for the advocacy that was involved in it. It’s definitely a possibility for non-profit organizations or disenfranchised communities. I could definitely be very satisfied in a career doing that.”