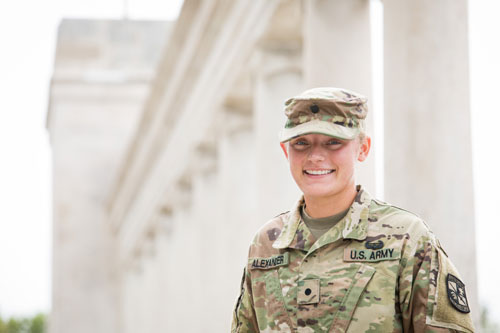 WKU senior Maddie Alexander is no stranger to hard work and worthwhile goals. Currently, the Psychology and Criminology double major is in the process of establishing not one, but two careers. The aspiring law enforcement and Kentucky Army National Guard officer helps lead WKU ROTC and also actively participates in the National Guard, where she is entering her fourth year of service. While it may seem like Alexander has a full plate, she is only getting started.

“I want to start locally while getting my graduate degree, then I will pursue working for a higher agency [such as the] FBI, CIA,” said Alexander when speaking on her plans after graduation. “While having a career in law enforcement, I will also have a career in the Kentucky Army National Guard. I plan on retiring from both careers.”

Alexander acknowledges the inevitable intensity that careers in both law enforcement and the National Guard will bring, but she credits her ability to remain collected under pressure in helping her succeed in both fields. “This will benefit my decision making when I encounter a stressful situation,” Alexander said.

Her role as WKU’s Cadet Battalion Training Officer in ROTC will also provide real-world training for her career goals. As an S-3 she prepares operations orders, training schedules, and memoranda to facilitate battalion training and operations. “I ensure that all training is rehearsed prior to execution, so that the training or mission is carried out successfully,” Alexander said. Next semester, she will serve as the Battalion Commander, or BC, where she’ll assume responsibility for all battalion activities. Recently, Alexander received the Civilian Sponsored Scholarship through USAA which is awarded to top ROTC cadets.

Hailing from Franklin, Kentucky, Alexander is familiar with the Western Kentucky area but admits that if it wasn’t for a National Guard recruit, she may not have found her home at WKU. “I made the decision to come to WKU because it was more beneficial for my future plans. Now that I am a senior, I look back and cherish my time on The Hill,” Alexander said.

Alexander will graduate in May where she will immediately commission as an officer in the National Guard. Here she will work towards Branching Aviation with aspirations to become a pilot. If this doesn’t pan out, Alexander says she plans to enter into Military Intelligence which will benefit her civilian career.

For the last 100 years, Western Kentucky University’s Army ROTC has transformed students into leaders of character for our Army and our Nation. WKU students from all academic fields join WKU ROTC each year with the chance to earn commissions as Army officers at the completion of their training.

For those interested in the program, please visit www.wku.edu/rotc or email Beth Dillon at Bethann.dillon@wku.edu.