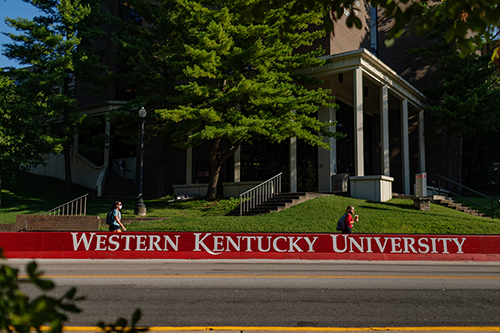 Beginning with the spring 2021 semester, WKU will no longer require standardized test scores, such as the ACT or SAT, for most applicants for admission.

“WKU is excited to be among the first of Kentucky’s public four-year universities to become test optional,” Vice President for Enrollment and Student Experience Ethan Logan said. The University began considering the move to test optional last year, and in the process various internal constituencies endorsed the change.

Logan said that a number of factors led to this decision. “Numerous national studies have indicated that a student’s high school GPA is the better predictor of college success than performance on a standardized test.”

“WKU is an institution of access and opportunity, and the research is clear that standardized tests contain inherent bias against underrepresented, first-generation and low-income students,” he said. “While we have taken significant action to limit the influence of the ACT and SAT in our internal admission and scholarship processes over the past few years, this change represents another important step toward ensuring that WKU is accessible to students who have demonstrated hard work over four years of high school, regardless of their performance on a single test.”

WKU eliminated the ACT requirement for most of its scholarships last year and has long given more weight to GPA over test scores in determining students’ admission eligibility.

In addition, Logan said many rising seniors, who still need access to higher education, have missed opportunities to take the tests because of the COVID-19 pandemic.

“We know that the COVID-19 pandemic has caused changes in the college search application process for most students,” Logan said. “Removing the stress associated with standardized tests is an immediate and important step we can take.”

Students with an unweighted GPA of 2.0 to 2.49 will still need to submit ACT or SAT scores to be considered for admission. Students with a GPA of less than 2.0 are not admissible.

If students wish to have test scores considered for placement or scholarship opportunities, they can still be submitted. For example, students who are interested in applying to the Mahurin Honors College or for WKU’s highest academic scholarships will be asked to submit standardized test scores.