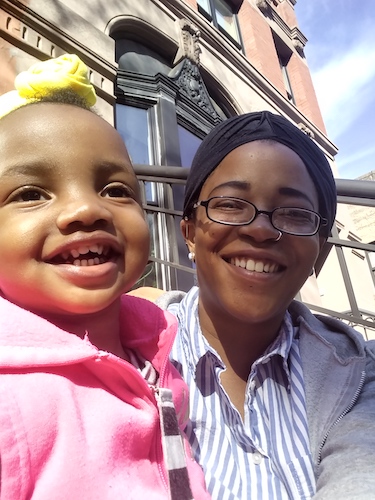 After winning a fellowship from the Lapidus Center for the Historical Analysis of Transatlantic Slavery for her project titled “Involuntary Pilgrimage: Black Southerners and Territorial Separatism, 1783-1904,” Dr. Selena Sanderfer Doss of the WKU History Department spent spring semester 2020 living and working in the Harlem section of New York City. The Lapidus Center is housed in the Schomburg Center for Research in Black Culture, part of the New York Public Library system and one of the premier collections of material related to Black history and culture in the country. Lapidus fellows, along with other Schomburg fellows, receive office space at the Center, and participate in weekly seminar meetings where they read and discuss each other’s scholarly work.

During this time, Dr. Doss, was able to complete drafts of two chapters of her book manuscript, despite facing the additional challenges of having to teach and manage childcare arrangements in an unfamiliar city. Overall, Dr. Doss greatly enjoyed her time at the Schomburg, where she had convenient access to “anything you could imagine that had to do with Black history,” whether from the Center’s collections or from local consortium partners like Columbia and New York University.

Dr. Doss found the weekly seminar meetings not only intellectually stimulating, but directly beneficial for her writing, in large part because of the diversity of scholars working at the Schomburg Center. As one of the few historians in the group, Dr. Doss read material by and received feedback from other fellows working in fields like art history, gender studies, literature, and music. This interchange helped bring a different feel to her own writing, for example by reminding her of the perspectives of authors like Sadiya Hartman or encouraging her to more closely consider concepts like social death and Afropessimism, which she says has also inspired her teaching. Dr. Doss appreciated the willingness of seminar participants to share and discuss work that was still in preliminary stages and to offer constructive criticism in a collaborative atmosphere. In particular, she singled out Brent Hayes Edwards, Director of the Scholars-in-Residence Program at Schomburg and Professor of English and Comparative Literature at Columbia University, for his sincere concern and assistance with even non-academic matters – such as faxing childcare forms – as well as the helpful insights and suggestions he had for all of the scholars in these seminars. (She also had high praise for the seminars’ catered lunches, which emphasized South African and Indian cuisine.)

Dr. Doss was also pleasantly surprised by how much she liked living in New York. Her Harlem neighborhood was a friendly and interesting place, and she enjoyed just taking walks around the block with her daughter. While commuting she listened to an audiobook version of Harlem is Nowhere: A Journey to the Mecca of Black America, by Sharifa Rhodes-Pitts, which gave her the chance to compare the author’s outsider perspective of Harlem with her own.

While the COVID-19 pandemic impacted her time as a Lapidus fellow, Dr. Doss opted to remain in Harlem and continue her productive work routine, though she shifted from her office space at the Schomburg Center to her apartment. The weekly seminars continued to meet remotely, while fellows were given special permission to check out and take home a few key works. Now back home in Tennessee and occupied with course preparation, other scholarly work, and daily life during a pandemic, Dr. Doss looks back with appreciation on the months she was able to spend working and living in New York thanks to the Lapidus fellowship, an experience which deeply enriched her work.