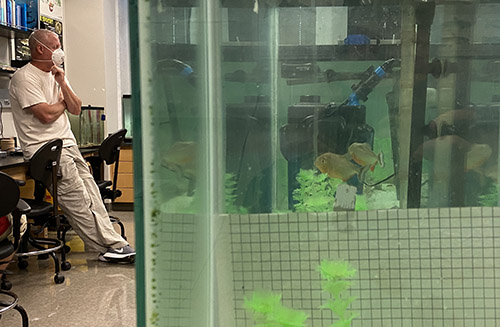 For the past two decades, WKU biologist Steve Huskey has studied the feeding habits of various species of fish from sharks and goliath groupers to bass and bluegill.

Now he’s revisiting another research subject – piranha. And he plans to conduct bite force tests on redbelly, redeye and piraya piranhas in his lab in the Complex for Engineering and Biological Sciences.

“When it comes to mastery of fish jaws in terms of biting, it just doesn’t get any better than piranhas,” said Dr. Huskey, associate professor in WKU’s Department of Biology.

However, he noted, piranhas aren’t the blood-thirsty creatures depicted in movies.

“It’s such an enigmatic creature,” Dr. Huskey said. “You say the word piranha and even my 6-year-old knows what they are. The vast majority of people fear them, unrightly so, but they do. There’s just not much known about them. From what we can tell, they’ve even got very sophisticated hearing capabilities, but it’s also something we’re not that knowledgeable about.

“Some of them, like the redbelly, travel in swarms. They school-up and they get this hyperbole around them that they’re marauding schools of bulldogs, but they really don’t eat things other than fins. They do so much fin-clipping of other fish so that’s how they get the vast majority of their nutrients.

“And yet two or three videos of a dead cow carcass getting destroyed by a school of piranhas makes everybody think that as soon as you touch the water that they’re going to eat you. The way I always put this is ‘Hollywood hyperbole.’ ”

Dr. Huskey, a functional morphologist who studies the feeding mechanisms and feeding habits of fish, among other things, has been at WKU since 2003. His research has been featured in programs on National Geographic Channel, Discovery, Animal Planet and NOVA.

In the fall of 2010, as part of a project titled Megapiranha for NatGeo, Dr. Huskey led a team of scientists that traveled to the Amazon Basin in Brazil to capture and study piranhas. He spent 10 days in water surrounded by piranhas and was never bitten. He even swam in a tank with 150 redbelly’s to record their feeding behavior and was completely ignored by the fish.

But his bite force research revealed why you don’t want to be on the business end of the piranha’s razor-sharp teeth. The 2010 study found that a 2-pound black piranha generated a bite force of 70 pounds per square inch or 35 times its body weight. Bite pressures exceeded 20,000 PSI. “Imagine if a great white shark could do that,” Dr. Huskey said.

“Piranhas really are masterful at what they do,” he said. “These guys generate tremendous bite force but that’s nowhere near the full story. The force is impressive, but if that force is distributed over a flat surface it doesn’t do much damage. By distributing that force across razor-sharp edges and really pointed teeth, it basically amplifies that force into pressures that are in the tens of thousands of pounds per square inch. So they can bite down hard. They can focus that bite into something really pointy and sharp. Then they couple that with this bulldog head-shaking maneuver that turns these teeth into a serrated knife sawing back and forth. When they’re biting down on something, they tend to tear it apart.”

In addition to studying more about piranha bite force, feeding behavior and tooth characteristics, Dr. Huskey hopes his current research can educate the public and right some wrongs about piranhas.

“Like with any other animal, such as sharks and snakes, piranhas get persecuted,” he said. “They’re treated like a malicious group of organisms. Animals get persecuted for whatever reason and it’s not deserved. All I’m trying to do is educate people and teach the facts about piranhas, so we don’t have to fear them.”