Hendron shows character on and off stage 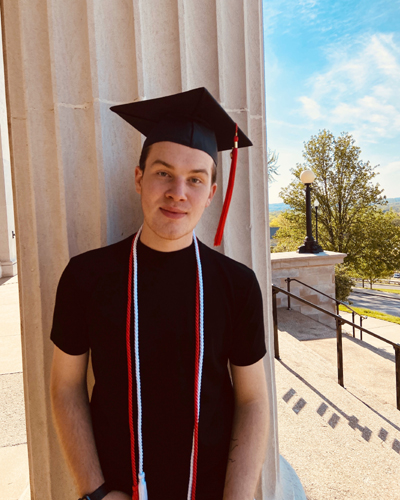 “My time in the Theatre & Dance Department has taught me three things that I will carry with me for the rest of my career. They are kindness, determination, and have fun,” said WKU graduating senior Cavan Kyle Hendron from Lexington. On May 15, Hendron will graduate with a Bachelor of Fine Arts in performing arts with a concentration in musical theatre.

“I do theatre because I have the honor of sharing stories. I get to be a conduit for a character to speak through,” Hendron said. “And through all of this, these stories allow audiences of all religions, races, shapes, sizes, etc. to come together as one to escape the real world for a period of time and experience these stories. Stories of those who were the underdog, the one in love, or even the one who was misunderstood. And on top of all of this, theatre has led me to some of the best experiences I’ve ever had with some of the most amazing people I’ve ever met.”

Some of those amazing people come from Hendron’s organization, work on stage, and supporting productions behind the scenes. “Whether it was creating more performance opportunities through cabarets, fundraisers, student engagement events, or department gatherings, Alpha Psi Omega was an organization I was so honored to be a part of,” Hendron said. He joined Alpha Psi Omega National Theatre Honor Society in fall 2017 and later served two years as Vice President.

Dr. David Young, Theatre & Dance Department Head said, “He’s (Cavan) performed in lots of shows, as well as worked backstage and in our office. The past couple of years he’s even designed dozens and dozens of posters for us. I know he will do well in our business because he’s a very hard worker and very generous with his colleagues.”

Hendron said, “Each show the department presents is structured just like a professional theatre company. From the crew, cast, and creative team, everyone comes together as one to create a show. And for me, there’s no other feeling like putting a show together.”

At WKU, Hendron participated in These Shining Lives, Mother Courage and Her Children, Nine to Five the musical, HAIR the musical, as well as several student-directed pieces and revues. Hendron noted that his participation in HAIR: The American Tribal Love-Rock Musical changed his life. He played Claude, a character that ends up being drafted into the Vietnam War, and must decide what he will do.

Hendron explained, “Telling this story of the fight for love, acceptance, and peace is something that still continues in many forms to this very day, and being able to let audiences, young and old, continue to hear this message was such an honor.”

Outside of Western Kentucky University, Hendron has participated in several shows across the state, such as; Matilda the Musical, Disney’s Beauty and the Beast, Disney’s The Little Mermaid, Annie, The Wizard of Oz, and many more.

“He’s supportive of everyone and he understands what’s required in our business. He did a great job at our New York showcase. The casting people there were impressed. Cavan knows how to make opportunities for himself,” Young said.

In January, WKU’s Department of Theatre & Dance conducted a senior showcase at Pearl Studios in New York City. At the showcase, WKU seniors performed in front of casting directors and received feedback.

Hendron said, “It was an experience that I will forever be thankful for and one that made me feel like, I can in fact do this! (And I will!)”

Since visiting WKU in high school, Hendron felt a sense of acceptance and community in the Department of Theatre & Dance that has contributed to a memorable college experience.

“Having the opportunity of being exposed to the theatre spaces and meeting people from the Theatre & Dance department was truly a special moment as a high school senior,” Hendron said. His school competed in the Kentucky Theatre Association hosted at WKU that year. “Even then, before I was a fellow Hilltopper, I felt the sense of acceptance and community the Theatre & Dance Department had to offer. Everyone was so kind and made you feel right at home. That’s when I knew this was the department for me.”