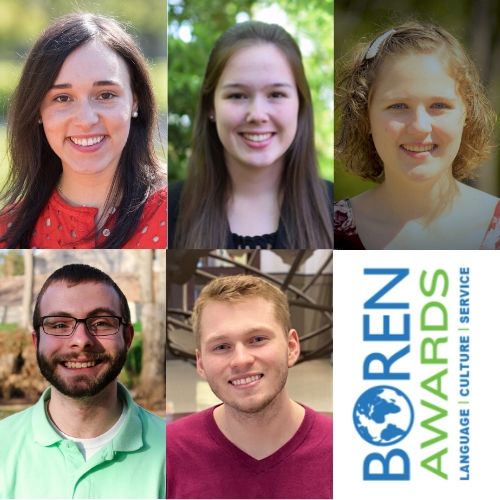 Five WKU students have been awarded $20,000 David L. Boren Scholarships to fund intensive language study in the US and abroad during the 2020-2021 academic year. All five are students in the Chinese Flagship Program.

The Flagship Capstone Year is the culminating experience of intensive language study intended to advance students to a level of fluency required to operate in a professional environment--often from zero experience at the beginning of their undergraduate career. Reaching ACTFL Superior proficiency standards, the goal of the Flagship curriculum, requires an extraordinary commitment from students as well as the faculty and staff who support them; in addition to intensive language study, Flagship students pursue majors across a variety of colleges and departments. These students have had no shortage of mentors to support them toward their goals.

“I was blessed to be surrounded by so many people--parents, friends, mentors, professors, OSD staff--who encouraged me so much that I would have quit a long time ago if it had not been for them being in my life,” said Mary Morgan Green. Victoria Hans acknowledged “overwhelming support and encouragement I have received from the WKU community throughout my time at Western, specifically in the Chinese Flagship Program and Department of Philosophy & Religion,” in which she completed her Honors thesis on gender-inclusive mosques in East Asia and the United States. Hohenstein acknowledged Dr. Brian Strow in the Department of Economics in particular for “all of the knowledge and assistance he has given me during my four years at WKU; with his support I am prepared to leave school and chase my dreams.”

Given the unprecedented global COVID-19 pandemic, the earliest possible overseas start date for Boren Scholars’ programs has been pushed back to January 1, 2021. The awardees for 2020 will be given some flexibility to ensure that as many as possible are able to proceed with their overseas language study when it is safe and feasible to do so.

While everyone involved hopes students are able to carry out their language study plans, the application process itself has been valuable. This application process has taught me that my dreams are never too big to achieve, and there is always someone out there that can help me if I just look,” said Hohenstein. “Going through the Boren application really helped put my short and long-term postgrad goals into perspective,” said Richardson.

The David L. Boren Scholarships and Fellowships are sponsored by the National Security Education Program (NSEP), a federal initiative designed to build a broader and more qualified pool of U.S. citizens with foreign language and international skills. Boren Awards provide U.S. undergraduate and graduate students with resources and encouragement to acquire language skills and experience in countries critical to the future security and stability of the United States. In exchange for funding, BOren award recipients agree to work in the federal government for a period of at least one year. “The National Security Education Program,” according to Dr. Michael A. Nugent, Director of the Defense Language and National Security Education Office (DLNSEO), “is helping change the U.S. higher education system and the way Americans approach the study of foreign languages and cultures.”

This year, the Institute of International Education (IIE), which administers the awards on behalf of NSEP, received 784 applications from undergraduates for the Boren Scholarships and awarded 217. Since 1994, over 7000 American students have received Boren Awards and contributed their vital skills to careers in support of the critical missions of agencies throughout the federal government. “To continue to play a leadership role in the world, it is vital that America’s future leaders have a deep understanding of the rest of the world,” says former U.S. Senator David Boren, the principal author of the legislation that created the National Security Education Program.