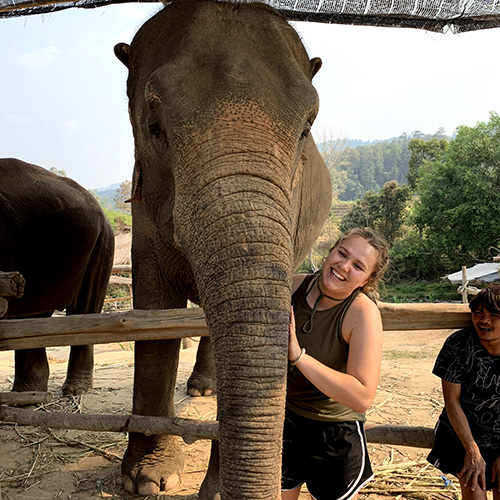 Amanda Beavin, a WKU majoring in Sociology and Geography & Environmental Studies with a minor in Citizenship & Social Justice, was studying abroad in Thailand for the 2020 spring semester until Covid-19 led to a premature return to the U.S.   Even though the culture is different, she had no trouble adjusting to Thailand’s laid-back lifestyle and had been enjoying her stay. Through her host program, USAC (University Studies Abroad Consortium), Amanda explored different locations on field trips throughout Thailand.

My favorite one was called the Trekking Tour where we spent 3 days in the Northern Thai countryside, staying in Karen villages and meeting elephants.  While in Chiang Mai, I had the chance to learn so much about Thai city culture in my daily life, but I also got a glimpse of rural life in Thailand through these excursions and associated coursework.

Amanda said that one major difference between Thailand and the USA is the significance of being a part of a community. “Asian cultures rely more on family than Western cultures” Amanda said. She said she felt this same sense of community with her USAC advisors, who went above and beyond to make sure she was okay.  This sense of community became even more important when Covid-19 cases began appearing in Thailand. She and two others from her study abroad group made a trip to Singapore when that country had only a few reported cases.  Three days into the trip, the situation changed and their study abroad group was flown back to Chiang Mai and placed under quarantine for 14 days. Events started looking bleaker as days went on. The CDC eventually declared a global level three travel advisory, and her study abroad program was canceled. This happened on Sunday, March 15th and by Wednesday the 18th Amanda was on a plane bound for the U.S.

There were so many plans that I missed out on. There were so many people and places that I never got to say goodbye to.  But, I knew that coming home was necessary given the state of the world.  It really was a surreal, crazy experience.

Amanda said that she is lucky she can finish her coursework online, but acknowledges certain challenges therein. Because of the 11 hour time difference course material is mainly provided through recorded lectures or powerpoints. Amanda said that some of the courses, such as her Thai language class, are hard to convert to that format.  “Learning online and taking a two week break in the middle of the semester, along with the classes I missed while in quarantine in Thailand, has certainly affected my performance in the class,” Amanda said.  She is also worried about doing her thesis project, which requires in-person interviews. However, even though this is a worry for her, Amanda said that everyone at WKU and USAC has been a big help to her, and they have made this situation a little less sad and stressful.  Her outlook remains positive as she moves forward to complete her degree from WKU in the Fall of 2020.