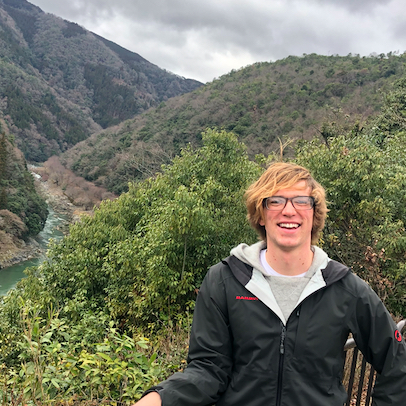 This spring, graduating senior Mac Williams was awarded a US Department of State Critical Language Scholarship to study Japanese language intensively in Okayama, Japan. When he heard the news, Williams said, “I could only think of Japanese scholar Yashiro Yukio’s words: ‘The time of the snows, of the moon, of the blossoms--then more than ever we think of our comrades,’” In this time of blossoms, Williams has felt gratitude for everyone who supported him through the process of application, particularly his “professor, mentor, and friend” Joseph Ertl in the Department of Modern Languages.

The Critical Language Scholarship Program, like all other summer study abroad programs, has been canceled due to the coronavirus pandemic. But Williams remains committed to advancing his Japanese language and cultural proficiency.

Williams, the son of Ronda and Dan Nelson of Radcliff, is an English major. His goal is to study and teach early twentieth century Japanese literature. “We, as a world-wide community, should look to the hardships and challenges faced during the Meiji era, learn from the successes and mistakes of that newly opened, rapidly industrializing country and apply them to modern challenges: the similar modernization of China, the dangers of nationalism,” he says. “And there are few better ways to learn about the heart of a society than through the novels and essays written by its people.”

Although summer program options have disappeared for students in 2020, they continue to work toward their goals. “I want to find a way to use my passion for understanding religion and philosophy to work abroad, potentially as an ambassador,” says Eichhorn. Hamm hopes “to make a positive impact on communities that have been disproportionately affected by geopolitical issues.” Richardson will finish out his Mandarin studies with a Boren Scholarship-funded year in Taiwan before pursuing a law degree and working in a federal agency on issues related to national security and East Asia. Williams continues to work toward plans to collaborate with international researchers on climate science and climate change policy.