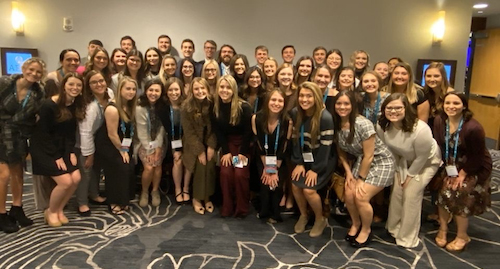 The WKU Panhellenic and InterFraternity Councils were each recognized at the AFLV (Association of Fraternal Leadership and Values) conference this past week. AFLV is the largest Greek Leadership conference in the world, with 3,500 fraternity and sorority leaders in attendance representing approximately 300 schools across North America.

The Panhellenic Council was awarded for excellence in area of Accountability. “It was a great experience getting to learn more about the possibilities we have through Greek Life,” WKU Panhellenic President Madison White said of the conference. “We are blessed to have the Greek community we do on our campus and it’s always humbling to be recognized at a national level for the accomplishments of our members and councils.”

The InterFraternity Council was awarded for excellence in areas of Accountability, Collaboration and Education. "For the WKU Greek system to be recognized in these categorizes is truly amazing,” WKU IFC President Kody Okert said. “To be recognized on a national level shows just how much work our fraternity men and sorority women are putting in to better themselves, WKU and our community as a whole. AFLV was truly a great experience."

Less than 20 percent of schools attending AFLV were recognized at the conference. The four awards won by the WKU InterFraternity Council and Panhellenic Council were more than any other school in Kentucky.

The WKU Forensics Team placed first in sweepstakes at the Mid-Atlantic Forensics League (MAFL) 2 tournament the weekend of Oct. 24-25. The team also placed second with a smaller group in the second half of the swing called the MAFL 3.