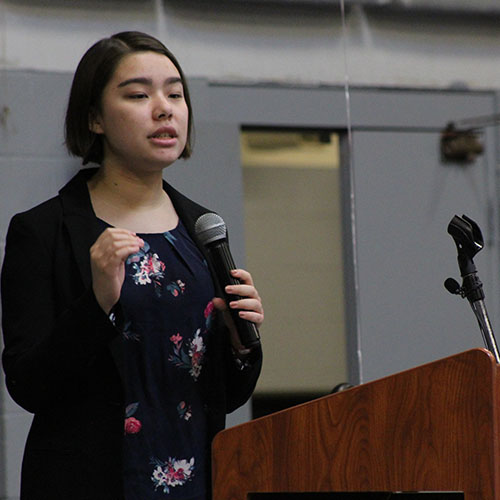 “I was excited to be able to address those in attendance with my take on the past and how we can take lessons from it into the future,” said Amadis Davis, Radcliff native and current student at the Gatton Academy of Mathematics and Science in Kentucky.

“Over the past year, I have met more new people than ever before. Hearing about the differences in life even in the same state was amazing, and I was able to talk about complicated issues with people from all different backgrounds,” Davis said. “This speech was my opportunity to bring my experiences back to the community.”

“She (and we) believe that words have more power than anything else,” said Davis’ mother, Insook Davis. “She has been writing to change this world in a better way. For people who have no voice in this society, she can put their light up (speak up) for them.”

The President of the Hardin County NAACP Branch Joyce Beasley asked Davis to speak at this year’s brunch after hearing her speak in response to winning an essay in 2019. “She was so amazing. Before she read her essay, she gave a speech, and she was so passionate. The title was Equality is Good, but Equity is Better. I was so impressed with her,” Beasley said.

Davis came to the Gatton Academy in the fall 2019 to progress her plans toward becoming a lawyer. She serves as president of the Hardin County NAACP Youth Council, and has previously served as the chair of the Hardin County Teen Court, which according to Davis, is a diversion program for juveniles.

“I decided that I wanted to pursue a career in law in my freshman year of high school, which would mean years of higher-level schooling. Gatton gave me the opportunity to get a head start on my bachelor’s degree while taking challenging courses and, of course, meeting new people.”

Since beginning at the Gatton Academy, Davis has served on the WKU Mock Trial Team and continued to volunteer back in Hardin County. For more information on the Gatton Academy of Mathematics and Science in Kentucky, visit www.wku.edu/academy.