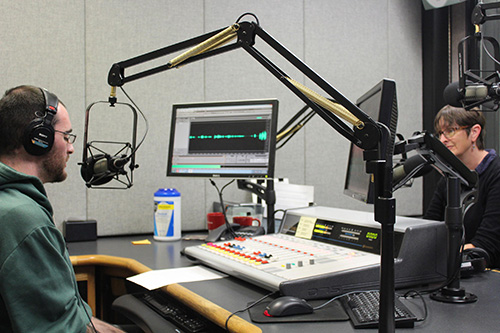 “The most significant goal of this Education Innovation grant is for WKU Public Broadcasting to serve as a model organization for hiring and employing individuals with ASD,” said Swietek. “Through partnerships with the Kelly Autism Program at the WKU Suzanne Vitale Clinical Education Complex; area businesses and organizations; and other public media stations across the country, we intend to replicate our efforts and serve as a leading organization for ASD inclusion in the workforce.”

“Annually, we employ an average of 40 WKU students, including the Brinkley Fellows, and train them in all facets of public media services. With the tremendous support of WKU and CPB, we’re able to enhance our mission to serve the public in innovative and impactful ways,” he said.

According to the Centers for Disease Control, the estimated number of children with ASD is 1 in 59. Mary Lloyd Moore, director of the Suzanne Vitale Clinical Education Complex, said, “As these individuals transition to adulthood, it’s important to take a holistic approach and support their transition to the workforce, as well.”

“What’s so important about this grant opportunity is that WKU Public Broadcasting is providing a unique opportunity for our ASD college students to gain valuable job experience, and also educating the business community on the benefits of hiring neuro-diverse talent,” she said.

“One of our key priorities at WKU is continually looking for ways to elevate our community, our state and our nation,” he said. “Through this grant, not only will students with ASD be educated in what’s expected of them in the workforce, the workforce will be educated in the value of these students.”

Collaborators on the project include an interdisciplinary faculty team from the WKU College of Education and Behavioral Sciences. Drs. Christina Noel, Thomas Gross and Adam Lockwood will assist in developing assessment tools for evaluating the project’s goals and outcomes.