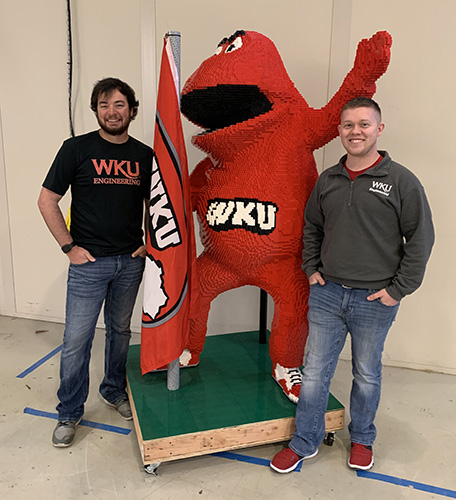 What weighs 350 pounds and took more than 500 hours to build?  The answer is a lifesize replica of Big Red made entirely of Legos.

WKU’s Amy Bingham talks to the people behind this labor of love in this week’s View from the Hill.

A college mascot made of Legos? Not something you see every day.

Civil Engineering program coordinator Jason Wilson says he got the idea for this project this time last year when Star Wars released the ultimate Millennium Falcon.

“Just got me thinking what if we do a life size big red.”

Students Taylor Collins and Austin Loney were thrilled when he approached them about building it.

“Both their eyes lit up immediately then I got a little scared, I thought oh I’ve got to figure out how to do this.”

From there, he, Taylor and Austin got to work.

“On the phone there’s a 3D app where you can completely scan the whole thing so that’s what he ended up doing with the real Big Red, we went off that then converted to a PDF of all Legos and just built it layer by layer.”

The 500-hour project was finished just in time to showcase Big Red in the Homecoming parade.

“The crowd went nuts over it. I didn’t expect them to go crazy like they did.  Everybody was yelling there’s Big Red, there’s Legos, it was pretty cool.”

Loney, who has already graduated and moved on to his first job, says it was a huge learning experience.

“It helped me with some aspects of my job like the management part.  We had to make sure we had the parts and do certain aspects in a timely manner.”

Turning a childhood pastime into hands on learning.

“Anytime we can find something the kids like to do we put them in front of it and let them do it.”

As for what happens next with Lego Big Red, Wilson says there are plenty of options.  Diddle Arena, Ogden College and the Augenstein Alumni Center have all expressed interest in putting it on display.