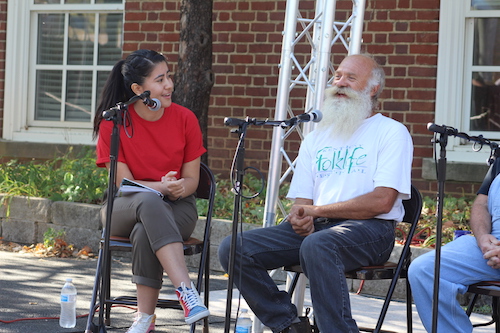 On Saturday, October 5th, the Kentucky Folklife Program and Folk Studies graduate students participated in “Hammer-In,” an event organized and facilitated by Western Kentucky University’s Kentucky Museum. This annual event celebrates the Metal Workers’ trade and partners with the Kentucky Forge Council to bring metal working to the WKU campus.

A narrative stage served as the event kick-off, followed by forge demonstrations, tinsmith demonstrations, an aluminum pour, and Green Coal classes taught by Chris Radus and Greg Knight. The narrative stage, an interview and demonstration conducted on stage with traditional artists and community members in front of an audience, was organized by the Kentucky Folklife Program and allowed metal workers Dave Gibson, Randy Hulsey, and Jonathan Eby to share the stories and passion behind their craft. The narrative stage participants were interviewed by Kentucky Folklife Program director Brent Björkman and Folk Studies graduate student Camille Acosta (pictured above with Dave Gibson).

Folk Studies graduate students participated throughout the event, serving as crowd counters, photographers, and videographers, among various other roles. Most of the student volunteers were members of Dr. Tim Evans’ Folk Art class, which played a vital role in the success of the event.