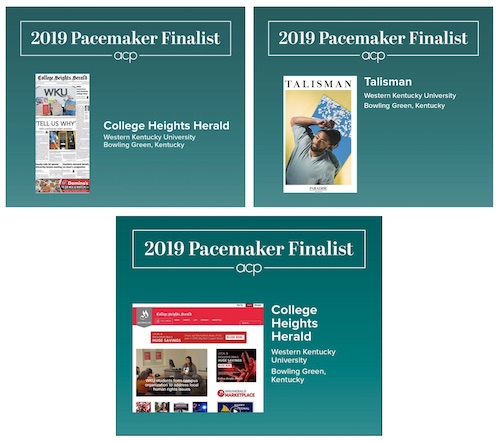 “Being Pacemaker finalists in three categories puts WKU in an elite club among student-run media in the country, “ said Chuck Clark, director of WKU Student Publications. “This says our students’ work is solid across the board, and among the very best you will find at any university anywhere in the country.”

The national Pacemaker Awards are handed out by the Associated Collegiate Press, the nation’s oldest student journalism organization, founded in 1921. The Pacemaker designation means an honored publication reaches a top level of quality in reporting, writing, photography, design and editing. The Pacemaker is considered the highest honor a student-run publication can receive.

Currently, WKU Student Publications holds 37 Pacemakers – 20 for Talisman and 17 for the Herald. Both publications are in the ACP Hall of Fame for their long records of excellence. The Herald most recently won the newspaper Pacemaker in 2017 and 2018; Talisman magazine won the online Pacemaker for WKUTalisman.com in 2016 and 2017.

The Herald’s two finalists are for its newspaper and for WKUHerald.com during the 2018-19 academic year, when Evan Heichelbech, a senior from Louisville, was editor-in-chief. The Talisman’s finalist is for its print editions of the magazine in 2018-19, which were led by editor-in-chief Hannah Good, a May 2019 graduate from Alexandria.

“These three finalist honors speak to the quality of work our students produce,” Clark said. “Yes, they are learning, with all that entails. But being finalists for three Pacemakers tells us that our students are taking what they learn in the classroom and applying in a real-world setting, and they’re doing that at a very high level.”

Winners of the 2019 Pacemaker Awards will be announced Nov. 2 during the National College Media Convention in Washington, D.C.