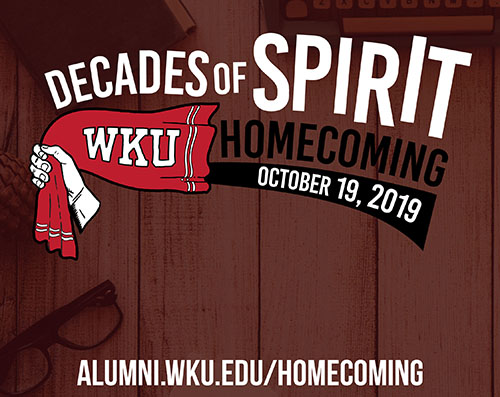 This year’s Homecoming theme, Decades of Spirit, celebrates WKU’s heritage and honors the University’s traditions over its 113-year history.

Homecoming week activities include pep rallies, a parade, reunions, award presentations and hall of fame inductions. Homecoming Day on Oct. 19 will feature tailgating, the crowning of the Homecoming queen and the football game between the Hilltoppers and Charlotte. With the football game kicking off at 3 p.m., the Festival of Friends Tailgating will be from 10 a.m. to 2:30 p.m.

Homecoming events begin Oct. 17 with the Homecoming Chili and Cheese Luncheon and Pep Rally—presented by Junior Achievement of South Central Kentucky, BlueCotton and the WKU Alumni Association—from 11 a.m. to 1 p.m. at Montana Grille, 1740 Scottsville Road in Bowling Green. Tickets are $6 and may be purchased at the door or in advance at alumni.wku.edu/chilicheese19.

Homecoming Friday Night on Oct. 18 will be highlighted by the annual parade and Big Red’s Roar. Sponsored by Midtown, the parade will begin at 5 p.m. at the intersection of College Heights Boulevard and State Street, across from Hardin Planetarium. The parade route will run down State Street to Fountain Square Park, left onto Main Street and left onto College Street, concluding at Cherry Hall on the WKU campus.

“Our student body does an amazing job bringing the Homecoming theme to life in the parade,” Hensley said. “We are excited to see what Decades of Spirit they choose to celebrate.”

Big Red’s Roar will be held on the front lawn of Cherry Hall immediately following the parade. Coach Tyson Helton and members of the WKU Football team will rally the student body in preparation for Saturday’s Homecoming game against Charlotte.

The Hall of Distinguished Alumni and the WKU Athletic Hall of Fame will induct new members during Homecoming festivities. Members of the 28th class of HODA – Scott Applewhite, Dr. Shirley Gray and Dr. Dixie Snider – will be inducted during a luncheon at 11 a.m. Oct. 18 at the Sloan Convention Center. Members of the 29th class of the Athletic Hall of Fame – Megan Argabright (Volleyball), John Bushong (Football), Jackie Cooper (Tennis) and Anthony Winchester (Basketball) – will be inducted during a brunch at 10 a.m. Oct. 19 at E.A. Diddle Arena.

“Homecoming brings together all members of the WKU Family to celebrate one thing we all have in common – the WKU Spirit,” Hensley said. “That Spirit may have looked different in 1919. We want to celebrate WKU now and then and all Decades of Spirit in between.”

The complete 2019 Homecoming schedule of events can be found at alumni.wku.edu/homecoming.