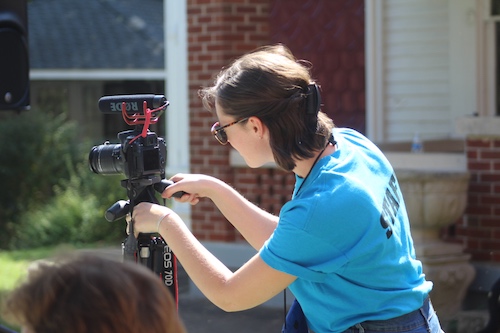 On Saturday, September 21, the Kentucky Folklife Program (KFP) organized and facilitated "Chattin' on the Porch," a narrative stage event held during the annual Horse Cave Heritage Festival in Horse Cave, Kentucky. Graduate students in the Folk Studies MA program worked together with Folk Studies and KFP faculty and staff in hosting the annual event held on the lawn of the historic Thomas House.

Students played active roles in each of the four narrative stages, which are interviews and demonstrations conducted on stage with traditional artists and community members in front of an audience. Students gained valuable experience moderating discussions, logging audio, running sound, taking photos, and capturing video throughout the event. This provided students with an excellent opportunity to practically apply skills and competencies taught throughout the Folk Studies program. Dr. Tim Evans' Public Folklore class was especially involved in the production of the "Chattin' on the Porch" stage, allowing students to experience firsthand how to apply principles, concepts, and skills taught in the Public Folklore course.

The Kentucky Folklife Program and the Western Kentucky University Department of Folk Studies and Anthropology have partnered with the Horse Cave Heritage Festival to present narrative stages for over ten years, and the success of this year's event emphasizes the values of this partnership for the students who participate and for the residents who attend.