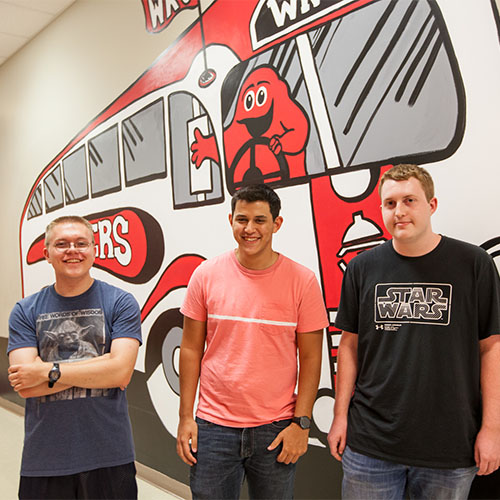 Some might say “hidden” inside the iWKU app are the names of three students and one new alumnus who created and maintain the mobile application that communicates course schedules, bus schedules, lab traffic, dining, events, and more to WKU students, faculty, staff, and prospective students.

As WKU Computer Science students, Joel Dehay of Bowling Green, Steven Popick of Somerset, and Richard Pike of Hodgenville work in the Department of Information Technology Services (ITS) with Web Developer Jamie Thomas to utilize their coursework and self-taught knowledge within an applied learning experience. Thomas spent two years working on the third phase of the iWKU app before graduating from WKU in May 2019.

“A couple of years ago we decided to make it (the iWKU app) student ran,” said Diana Keeling, Manager of Web Development and Application Support. “We wanted to give students the opportunity to have real-life experience.”

The experience for Dehay, Popick, Pike, and Thomas has proven to be real and unique. Before graduating in May, Thomas had spent much of his time creating the vision and design for the third phase of the app launched on August 15, 2019. Pike worked on the maps, Popick worked on notifications and the reporting used for M.A.S.T.E.R. Plan, and DeHay spent time on functionality.

“The (Computer Science) courses introduce the concepts, and all we are doing is applying the same concepts in a different language,” DeHay said. “Once you learn the concepts in the classroom you can apply it to any program language.”

The students have already experienced how to address issues that need an immediate response. Dehay, Popick, and Pike learned from Web Developer Luke Akridge, who addressed an issue on the first day of class caused from an increased number of users to the application.

“Basically, when people look up their course schedules, it talks to the iWKU server, and the iWKU server then talks to TopNet (Banner),” Akridge said. Those servers were overload with thousands of students checking their schedules and other information at the same time. Akridge explained it using a traffic analogy. “Eventually the server could not handle all that traffic. It was que’d up in rush hour traffic, and only so many people could go through at a time.”

Since the first day of class, Dehay, Popick, and Pike have been working on the next update to the application. It is expected to include dark mode, adjustments to the events module, and an interactive map to view the bus locations in real time.

“I use it probably on a daily basis,” Pike said.

The iWKU app is available on android and iOS devices. WKU ITS invites users to submit recommendation for new features in the iWKU app. Those can be submitted at https://td.wku.edu/TDClient/Requests/ServiceDet?ID=46.