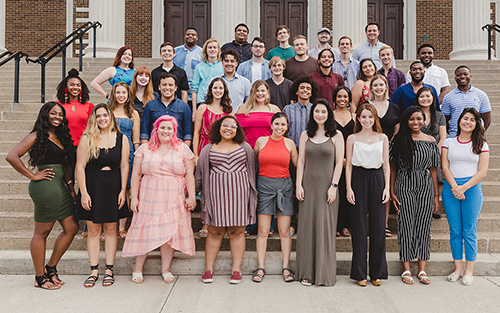 The 32 members of the WKU Forensics Team have returned to campus and are preparing for the 2019-20 season.

The champion speech and debate team welcomes nine new members this fall, recruited from across the nation, pursuing a variety of academic programs at WKU.

The team will begin the season on Sept. 20 when it hosts the annual WKU/Alumni Fall Swing Tournament and the Alexis Elliott Memorial Lincoln-Douglas Round Robin debate tournament. The first is open to all postsecondary schools who wish to attend, and usually brings about 23 schools to campus. The latter is an exclusive invite-only debate tournament, for debaters already recognized as some of the best in the nation.

“We are so excited to welcome such a talented group of students to The Hill,” Director of Forensics Ganer Newman said. “This preparatory camp was so productive because every student put in a tremendous amount of effort during the summer months. We cannot wait to see all we will accomplish this season.”

“Like last year, we are focusing more of our attention on campus and community building initiatives,” Newman said. “We opened the season volunteering for Habitat for Humanity, and we are proud to contribute to the WKU’s Strategic Plan and help our university climb to greater heights with another championship season.”