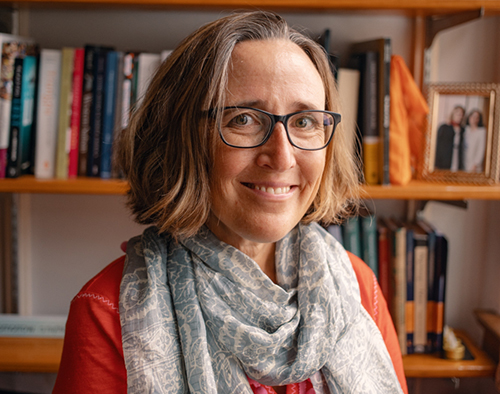 A WKU faculty member has received a grant to continue her research on the practice of Islam in Indonesia.

Dr. Sophia Rose Arjana, assistant professor of Religious Studies in the Department of Philosophy and Religion, was awarded a $2,500 research grant from the Center for Islam in the Contemporary World (CICW) at Shenandoah University this summer.

She will use the grant to support her book project The Mosque with the Thatched Roof: Embodiment, Material Religion, and Gender in Indonesia. This book, which is under contract with Oxford University Press, explores the practice of Islam in Indonesia through the lenses of material religion, gender and embodiment.

“I had spent quite a bit of time in Indonesia over the past five years. Then about two years ago I started to do field work,” said Dr. Arjana, who is beginning her third year at WKU. “This book is about is gender and material religion in Indonesia. The grant supports my work because CICW is interested in supporting scholarship that looks at understudied areas of the Muslim world. Indonesia is the largest Muslim country in the world. There’s been very little scholarship compared to Arab majority states, south Asia, Persia, and Turkey, on this part of the world. So they were very interested in supporting my work.”

Dr. Arjana’s previous books are Muslims in the Western Imagination (Oxford, 2015); Pilgrimage in Islam: Traditional and Modern Practices (Oneworld, 2017); and Veiled Superheroes: Islam, Feminism, and Popular Culture (Lexington, 2017). Muslims in the Western Imagination has been licensed in both Arabic and Turkish. This summer, Veiled Superheroes was released in paperback edition. She has just completed her fourth book, Buying Buddha, Selling Rumi: Orientalism and the Mystical Marketplace, which will be published by Oneworld in spring 2020.

The Mosque with the Thatched Roof: Embodiment, Material Religion, and Gender in Indonesia will be Dr. Arjana’s fifth book.

“In a way, this new project builds on what all my books focus on, which is telling these untold stories about Islam and Muslim life,” she said.

Dr. Arjana’s field work includes research and interviews in West Java, Central Java, North Java and the islands of Bali and Lombok. The book is a study of the practice of Islam in Indonesia focusing on lived traditions, such as prayer, dress, pilgrimage and other rituals. These traditions are of interest beyond their distinct cultural expression.

“I approach my subject through case studies of a village in West Java, the oldest mosques on the island of Lombok, Muslim shrines and pilgrimages, and the fashion scene in Jakarta. Through these, I present a portrait of Islam that is diverse, vibrant and body-centered,” Dr. Arjana said.

She is also developing a Colonnade study abroad course that will take students to Indonesia.

“I’m interested in trying to push back against the dominant narrative about Islam that all Muslims do the same thing. Indonesia is an interesting example of that. The practice of Islam there doesn’t fit into the narrative.”

She hopes that her book can used as a text in Islamic Studies and World Religions classes, as her other books are used in colleges and universities around the world, including Brown University, Bates College, McMaster University and University of Delhi. Once this book is completed, Dr. Arjana hopes to focus other future research on Islam in Indonesia. As an enormous archipelago with over 17,000 islands and over 300 languages, there are ample opportunities for academic research.