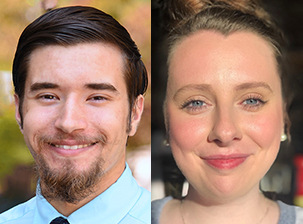 WKU seniors Dallas McKinney and Olivia Cahill have been awarded scholarships by the American Meteorological Society.

“The Meteorology Program at WKU has a strong reputation for recruiting excellent students such as Olivia and Dallas who continue to add to the list of national scholarships winners,” said Dr. Josh Durkee, WKU University Meteorologist, director of White Squirrel Weather and Associate Professor of Meteorology in WKU’s Department of Geography and Geology. “Student success is the foundation for our program and we are especially excited to see what our students achieve in the coming academic year.”

Cahill was awarded the L. Michael Trapasso Meteorology Scholarship (rising junior 2018 and rising senior 2019) and participated in the National Center for Atmospheric Research (NCAR) Undergraduate Leadership Workshop (June 2019). She is interested in weather forecasting and emergency management. Cahill has plans to attend graduate school to obtain a Ph.D. and has long-term aspirations of becoming a professor of meteorology.

The Ken Reeves AccuWeather Memorial Scholarship honors the late Kenneth W. Reeves and his many contributions as an advocate, mentor and supporter of undergraduate students and their future careers in Atmospheric Sciences. Reeves’ passion for the weather led him to a successful 29-year career at AccuWeather where, as the Vice President of Forecast Operations, he would actively recruit, teach and guide recently graduated Meteorology and Atmospheric Science students as they began their careers.

About AMS: Founded in 1919, the American Meteorological Society is the leading voice in promoting and advancing the atmospheric and related oceanic and hydrologic sciences. Headquartered in Boston, with an office in Washington, D.C., AMS has more than 13,000 members, including researchers, scientists, broadcasters, educators, and other professionals, as well as students and weather enthusiasts.

Virtual reality. Augmented reality. Mixed reality. Extended reality. Whatever term you use for it, a new digital world is taking shape this summer in the XR Research Lab on the third floor of the WKU’s Industrial Education Building.