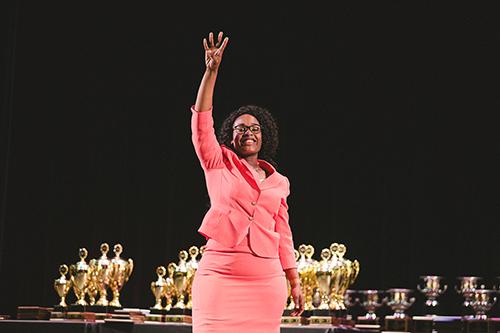 The WKU Forensics Team boasts seven individual sweepstakes national championships -- an individual's success across multiple events of competition -- by five students since 2006; while four of those students each hold one title, Ambam holds three.

Ambam won the individual sweepstakes championship in 2018 at the American Forensic Association National Individual Events Tournament, and in 2019 she won both those same titles from the AFA NIET and the National Forensic Association national tournament, for a total of three. In order to gain the title at the NFA tournament, Ambam reached the final rounds in all six events in which she competed, won two of them, placed second in three and was fourth in the final event. Only five other people in the nation's history have equaled Ambam's three titles, and only one has surpassed it in the 40-plus years of these two national leagues.

Ambam, a Psychology and Criminology double major from Peculiar, Missouri, graduated last weekend in WKU’s Class of 2019 and was recognized as a Scholar of the College of Education and Behavioral Sciences.