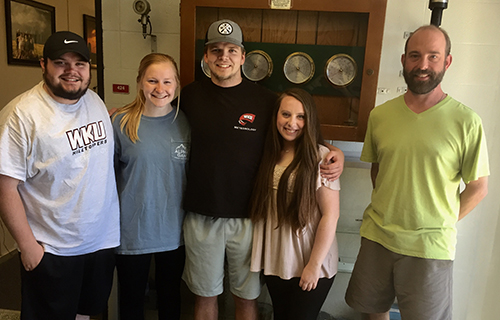 WKU student Olivia Cahill will accomplish one goal later this week when the WKU Storm Chase class begins its 10th journey across the Great Plains.

“The storm chase has been the No. 1 thing on my bucket list for as long as I can remember,” said Cahill, who first heard about the trip as an eighth-grader in Dry Ridge and came to WKU because of its meteorology program and the storm chase class. “I have been attracted to meteorology my whole life.”

Cahill is one of eight students who will leave the WKU campus on Saturday (May 18) for the annual two-week trip to forecast, analyze, document and study severe convective storms.

Dr. Josh Durkee wasn’t expecting the Field Methods in Weather Analysis and Forecasting course to become a force of nature when it launched 10 years ago.

“I just thought I would create it and it would unfold in a natural way,” said Dr. Durkee, WKU University Meteorologist, director of White Squirrel Weather and Associate Professor of Meteorology in WKU’s Department of Geography and Geology. “I love storms. I just thought that students would follow along.”

And follow along they have. In the previous storm chase trips, students have traveled 65,042 miles across states, which is roughly like driving around the equator 2.5 times. After this year, the total will be close to three trips around the globe.

Bailey Stevens of Bloomington, Illinois, is participating in the storm chase class for the second time and says the experience is priceless for the student forecasters as textbook examples come to life. “You can only learn so much in the classroom,” she said. “This is a great chance to apply what we have learned in the field.”

Luke Rogers of Waynesboro, Minnesota, is looking forward to seeing the types of storms often seen in textbook photographs. “We aren’t able to see storms like that in this area,” he said.

Meteorology students learn about theories in the classroom and conduct semester-long research projects on past weather events, but Dr. Durkee said the storm chase class combines theory and research into real-time forecasting.

“From my perspective, this university is about applied learning,” Dr. Durkee said. “To wake up somewhere and take what they’ve learned in the classroom and make logistical decisions is the quintessential model of applied learning.”

While students may not recall some of their classroom work, he said, “they will never forget those two weeks.”

C.J. Padgett of Belleville, Illinois, said having the opportunity to make real-time forecasts and daily travel decisions is what sets the WKU storm chase class apart. “Students do all the forecasting. It’s not just a storm tour,” he said.

Other students participating in the trip are Jonathan Oglesby of Greenville, John Bowen of  Louisville, Thomas Giebel of Germantown, Maryland, and Jordan Crabbe of Bowling Green.

As part of the course’s 10th anniversary, Crabbe will be documenting the storm chase class as part of a project for WKU PBS. “We’ve always wondered what this trip looks like so we’re excited about that,” Dr. Durkee said.