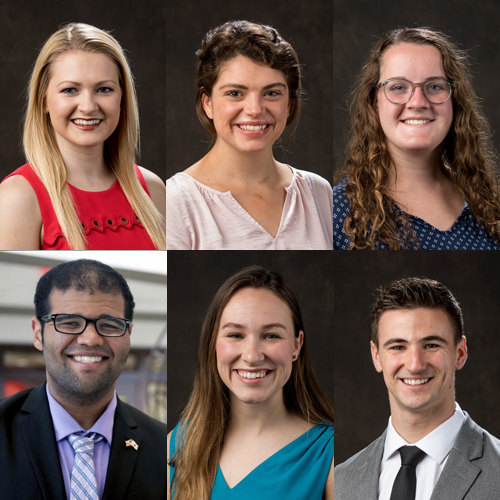 Five WKU students have been offered Fulbright U.S. Student Grants for the 2019-20 academic year from the U.S. Department of State and the J. William Fulbright Foreign Scholarship Board, and one has been designated as an alternate. They are among over 2100 graduating seniors and recent graduates selected this year on the basis of academic and professional achievement as well as record of service and leadership potential in their respective fields.

Nicole Childress, a graduating senior in Marketing, is the daughter of Jayne and Chad Childress of Crestwood. Her Fulbright grant will fund study in the MSc Marketing program at Trinity College Dublin. At WKU, Nicole has worked in design and marketing research for the College Heights Herald and the Talisman. Most recently, she has served as the Founder and Creative Director of Cherry Creative, a student-led media agency producing creative sponsored content and themed supplements in WKU student publications. She has served as a Spirit Master and is included in the Greek Academic Hall of Fame as a member of Alpha Delta Pi sorority. Off-campus, she completed internships in communications and public relations at General Motors in Bowling Green and C2 Strategic Communications in Louisville. Her Fulbright project was inspired by a trip to Dublin in the midst of a semester at Harlaxton College and builds on her Honors thesis research on the relationship between a university’s goals for its public perception and how it is actually perceived by students, staff, and the community. At Trinity College Dublin, Nicole will explore how brands and cultural identity shape one another and drive consumer behavior by focusing on the relationship between the Guinness brand and young Irish adults’ sense of Irish identity. She aims to pursue a career in brand management, helping brands connect people by embracing diversity and promoting tolerance and equality.

Keightley Dudgeon, a graduating senior in Arabic, is the daughter of Mary and Greg Dudgeon of Crestwood. She has been awarded a Fulbright to teach English in Morocco. Keightley’s interest in teaching English in the Middle East comes from her volunteer and language study experiences. She has served as a mentor at the YMCA Newcomer Program that serves recently resettled refugees and immigrants in Louisville and interned at Kentucky Refugee Ministries in 2018. In addition, she has tutored students in the English as a Second Language International Center at WKU, interned at the Middle Eastern Children’s Institute in Amman, Jordan, and served as a summer camp counselor at Pine Cove in Columbus, Texas. She is a 2018 recipient of a U.S. Department of State Critical Language Scholarship that fully funded a summer of intensive Arabic language study in Morocco. The previous summer, she completed an intensive language program in Jordan. A former college athlete, Keightley looks forward to engaging in her host community in Morocco by organizing a weekly gathering for Moroccan women interested in pursuing fitness outside of the gym. She plans to pursue a career teaching English abroad, particularly in the Middle East.

Amelia Kolb, a graduating senior in Spanish, is the daughter of Kim and Bruce Kolb of Louisville. She earned a Fulbright grant to teach English in Mexico. Amelia’s interest in teaching English is rooted in her work with Doors to Hope, an organization offering ESL and GED classes to Latinx families in Louisville. While at WKU, Amelia has developed her skills and interest in leadership, management, planning, and mentoring as Chapter President of Alpha Xi Delta. In addition, she has served as an immigration case manager intern at the International Center of Kentucky. Her experience in Latin America includes volunteering in Costa Rica and Belize and studying in Peru and Mexico over the past four years. After her Fulbright year in Mexico, she plans to pursue a career teaching English language learners in the U.S. and abroad.

Deven Richardson, a graduating senior in political science and international affairs, is the son of Christy Richardson of Bowling Green. He earned a Fulbright grant to Japan conduct research on Japanese university students’ perceptions of Americans and the Japanese-American relationship. Deven has developed his ambassadorial skills and interests in activities across campus and beyond, serving as Hall Council President, an SGA Senator, a Mahurin Honors College Ambassador and Freshman Orientation Retreat Counselor, and a Study Abroad and Global Learning Representative and Exchange Student mentor. He previously earned a Gilman Scholarship to fund a semester of study in Japan, and declined a U.S. Department of State Critical Language Scholarship to participate in the Rangel Summer Enrichment Program for students interested in careers in international affairs. This year, he was also awarded a Rangel Graduate Fellowship which will fund a Master’s degree in Foreign Service at Georgetown University when he returns from his Fulbright year in Japan. Deven intends to pursue a career in the Foreign Service of the U.S. Department of State.

Corinne Warlick, a graduating senior in chemistry, is the daughter of Liz and Josh Warlick of Louisville. Her Fulbright grant will fund an academic year of research at the Wallenberg Wood Science Center in Stockholm, Sweden exploring the possibility of preserving byproducts of the wood pulping process for use in other applications. Her research project builds on a strong foundation of varied experiences at WKU. Corinne has conducted research in chemistry and engineering on campus and completed summer internships with Brown Forman in Louisville and Woodford Reserve Distillery in Versailles. During a National Science Foundation-funded research internship at the University of Louisville, Corinne studied polymer materials from an engineering perspective. She has developed ambassadorial served as coordinator of events for the Mahurin Honors College Ambassador organization and an Honors Freshman Orientation Retreat Counselor for the past three years. In addition, she was active in Christian Student Fellowship, Women in Science and Engineering, and served as the leadership excellence chair of Kappa Delta Sorority. She will begin a PhD in chemical engineering at Vanderbilt University upon her return from Sweden.

Max McGehee, a 2017 graduate in Spanish and public relations, was named an alternate for a Fulbright to study management at the Instituto de Empresa in Madrid, Spain. He currently works as an international recruitment and admissions counselor in International Enrollment Management (IEM) at WKU and is the son of Michelle and Kerry McGehee of Erlanger. In his role at IEM, he has met with prospective students and counselors all over the world, building on his long experience as a Mahurin Honors College tour guide and chair of public relations and community engagement while an undergraduate. This fall, he will begin a fully funded MBA specializing in Supply Chain Management at the University of Tennessee.

The Fulbright U.S. Student Program is administered at WKU through Melinda Grimsley, the coordinator of international scholarships in the Office of Scholar Development. Students and recent alumni interested in discussing the program are encouraged to schedule an appointment by emailing osd@wku.edu. The campus deadline for the 2020-21 grant year is September 3, 2019.

The Fulbright Program is the U.S. government’s flagship international educational exchange program and is designed to build lasting connections between the people of the United States and the people of other countries.  The Fulbright Program is funded through an annual appropriation made by the U.S. Congress to the U.S. Department of State.  Participating governments and host institutions, corporations, and foundations around the world also provide direct and indirect support to the Program, which operates in over 160 countries worldwide.

Since its establishment in 1946 under legislation introduced by the late U.S. Senator J. William Fulbright of Arkansas, the Fulbright Program has given more than 390,000 students, scholars, teachers, artists, and professionals of all backgrounds and fields the opportunity to study, teach and conduct research, exchange ideas, and contribute to finding solutions to shared international concerns.

Fulbrighters address critical global challenges in all disciplines while building relationships, knowledge, and leadership in support of the long-term interests of the United States.  Fulbright alumni have achieved distinction in many fields, including 59 who have been awarded the Nobel Prize, 84 who have received Pulitzer Prizes, and 37 who have served as a head of state or government.