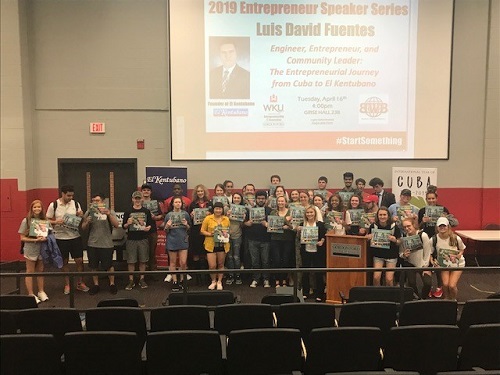 In partnership with the IYO Cuba and the Business Without Borders student organization, the Center for Entrepreneurship & Innovation invited students to head Mr. Luis David Fuentes discuss his journey as an engineer, entrepreneur, and community leader.

Lauren Reyes, Coordinator for the WKU Office of International Programs was thrilled that Mr. Fuentes was able to visit WKU’s campus in conjunction with the 2018-2019 International Year of Cub and Entrepreneurship Series.

“As a Cuban immigrant to Kentucky, he had such a unique perspective on entrepreneurship and offered not only insight into his work but also a deeper understanding of the Cuban community in Louisville,” she said.

Mr. Fuentes is an engineer from Cuba, who fled Cuba for Chile. After deciding to move to the United States, Mr. Fuentes and his wife considered different cities that would give their family ample opportunities to grow. Even though there was a strong Cuban community in Miami, the couple wanted to ensure that their family would have the chance to fully embrace America and all that it had to offer. Luis and his wife, Yamileta, relocated to Frankfort, where Luis worked his way up from sweeping the floor in a factory to an environmental engineer for the state government.

While residing in Frankfort and working full-time for the state government, Mr. Fuentes began the Spanish tabloid El Kentubano to link the Cuban community in Louisville to important information. He described his son and daughter as El Kentubano, meaning they had the perfect mixture of Cuban and Kentucky culture, so it was only fitting that it become the name of the tabloid.

El Kentubano is a free, monthly tabloid that is a vital staple for the Cuban community in Louisville. It is a vehicle to recreate past historical experiences and to keep everyone updated about local events and other community news. When the publication began in 2009, only 1,000 copies were printed of the 20-page tabloid. Two years ago, Mr. Fuentes left his job as an engineer to focus full-time on El Kentubano. Today, it is a 92 page magazine with more than 10,000 copies available at newsstands and 38 Kroger stores around the city of Louisville. El Kentubano has won several awards, including the Louisville Inc.Credible Inclusion & Diversity Award in 2018 and the 2017 Kentucky Minority Owned Small Business of the Year.