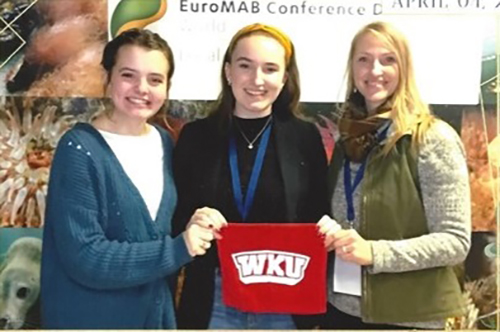 Three representatives from WKU have recently returned from the UNESCO EuroMAB 2019 meeting in Dublin, Ireland.  WKU’s representatives made up one-third of the nine-member U.S. delegation at the international gathering.

The three WKU representatives were:

Lillian Hamm, a junior from Somerset majoring in Geology and Chinese and a student in the WKU Honors College, and;

Each of the women were invited to present across the two workshop sessions of Partnerships with Universities and Research Institutes.  Bledsoe presented ‘WKU and MCABR: A Research Partnership,’ discussing the long and successful research relationship between the two and the mutual benefits.  Hamm and Poole presented WKU faculty-mentored research they have been conducting over the past year analyzing cave and karst resources across BRs globally.

Bledsoe, Hamm, and Poole also participated in several other workshops including Biospheres as Climate Change Observatories, Youth Empowerment, and Building Synergies between Protected Areas.  In addition to technical sessions, several study tours were offered to delegates to see the MAB program in action within the Dublin Bay BR including trips to Howth Head to observe land management and conservation efforts as well as a Biosphere Discovery Cruise discussing how to balance biodiversity and one of the busiest ports in Europe. The conference also included cultural events at historical and iconic buildings such as Dublin Castle, Christ Church Cathedral, and the former Jameson and Guinness estates.

This year’s conference theme was ‘Local Actions for Global Challenges’ recognizing that we can all take action at home to address issues affecting people and the environment on a larger scale.  The meeting was comprised of plenary and workshop sessions where delegates developed practical actions and identified potential collaborative measures each delegate could be involved in across the network.

UNESCO selects international biosphere reserves based on their unique ecosystems and exemplary biodiversity. Mammoth Cave National Park is the core area of the Mammoth Cave Area Biosphere Reserve (MCABR) and was designated as such in 1996.  However, the MCABR extends beyond the park boundaries to include portions of six counties – Edmonson, Hart, Barren, Butler, Metcalfe, and Warren – in its programmatic jurisdiction.

Biosphere Reserves are designed to integrate environmental conservation and sustainable economic development as to protect the well-being of all living things – humans included – and promote ecological and cultural diversity and community involvement.  The MCABR is co-managed by the National Park Service and the Barren River Area Development District and has a 22 member Advisory Council made up of local stakeholders, scientists, community leaders, elected county officials, and state and federal organization members.