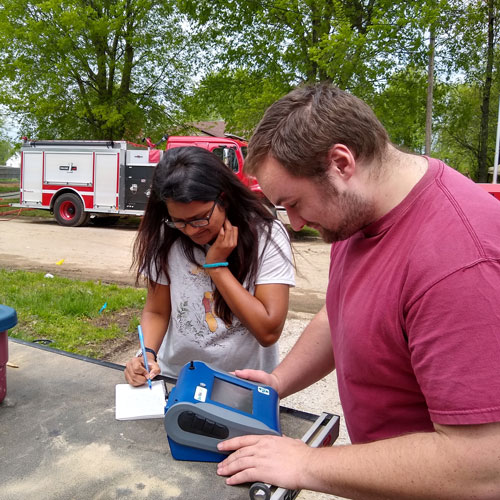 EVANSVILLE, IN (WFIE) - You may have seen a lot of smoke in Owensboro Saturday.

That’s because firefighters were using an abandoned house for field training.

“A big thing with new fire fighters is when we put this gear on it does a very good job at keeping the heat out there could be anywhere between a 100 -250 degree difference,” said Instructor Chris York.

Using an old home that had been abandon, respondents learned about fire behavior: the different kinds of smoke, smoke paths, and search and rescue.

“As a fire fighter you have to be more aware now then you did 20 years ago about how that house is going to burn,” said York.

The fire fighters weren’t the only ones using the home to learn. Researchers from Western Kentucky University joined the team in hopes to make head way in cancer research.

“We know that fire fighters are at risk of a greater risk of cancer due to their exposures to fire smoke contaminants and specifically carcinogens that are in fire smoke,” said Professor Ritchie Taylor.

Student researchers tested the smoke from the home used for training and in a few weeks they will return to do more tests specifically on the fire fighters.

“This is about the 18th house that I’ve trained on, done training with and this is the first time we’ve tried some of the stuff we did and i think this is the best class that we’ve done too,” said York

Firefighters and the WKU research team will be coming back together in mid-June to run more tests for their study and do more training for the fire fighters.