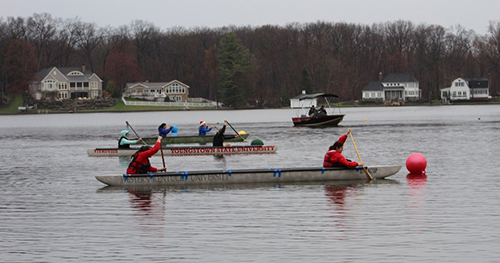 For nearly three decades WKU’s concrete canoe team has been competing, often making it all the way to nationals.

This year is no exception as WKU’s Amy Bingham explains in this week’s View from the Hill.

Since last August members of WKU’s concrete canoe team have been pouring their heart and soul into concrete canoe preps. And the hard work is paying off.

“My teacher said you can be as loud as you want.”

“I watch Braveheart and all those kinds of movies and it really pumps you up and so I looked out over the water and thought OK this is the time.”

“They’ve put in a ton of work.  Anything that we recommended they do,  they take a step further.”

The team even redesigned the hull for this year’s race.

“The goals there were to make a boat that was lighter yet stronger than past years so we were able to do that.”

Using a theme of karst topography, the team put in 3,000 hours preparing an oral presentation, a 50-page paper, a display and, of course, the canoe.

“We treated it like a job.  We’d come here like a 40-hour work week and even more sometimes.”

Learning a lot more than just why those calculus classes were so important along the way.

“The life lessons from team work to communication, it’s amazing how much this project has taught us outside the field of engineering.”

“It’s a lot of fun and a lot of work.  Students get a lot out of it just like I did when I was participating.”

The canoe, aptly named Stalactop, isn’t finished yet.  It will be back in the water on June 6 at the national competition in Florida.

“They did excellent, they blew it out of the water.  It’s been an incredible year for them.”

Many of the team members also belong to the WKU Chapter of the American Society of Civil Engineers. The chapter was just named most improved and top five worldwide and will find out in May if WKU is named best overall student chapter.