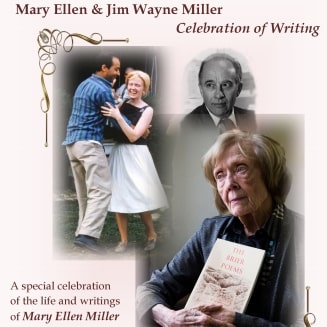 Western Kentucky Historian David Lee welcomed family, students, faculty, and alumni to the Kentucky Museum for the newly renamed 22nd Annual Mary Ellen & Jim Wayne Miller Celebration of Writing. The celebration is named after Dr. Jim Wayne Miller who taught German at WKU for over thirty years until his death in 1996, and his wife, Professor Mary Ellen Miller, who taught poetry and literature at WKU for 55 years until her death in 2018.

A writer in many genres, Dr. Miller would be best known for his poetry and numerous books including: Copperhead Cane (1964), The Mountains Have Come Closer (1980), and Newfound (1989). Professor Miller was also well-known for her poetry. She published many poems as well as the collection, The Poet's Wife Speaks (2011). Together with Morris Allen Grubbs, she also published Every Leaf a Mirror: A Jim Wayne Miller Reader (2014).

The Mary Ellen and Jim Wayne Miller Celebration of Writing is a contest hosted annually by WKU and is open to students with an English major or minor as well as those in creative writing classes. The ten poetry contest finalists for this year’s celebration are: Devin Beach, Casey Child, Elizabeth Crowe, Delaney L. Holt, Emily Houston, Alex Huntsman, Jessica Kiehnau, Carder Venable, MacLaren Williams, and Iman Zaghariet.

Dr. Robert Hale shared a message with everyone sent by Ruth Miller, daughter of Mary Ellen and Jim Wayne Miller, about her parents.

“Writing is often thought of as a creative act, which of course it is but, the written work of both my parents and their dedication to inspiring the writing of others underscores the degree to which writing is also a deeply intellectual and political act. My father frequently expressed that writing is not a mere matter of having something to say and then figuring out how to say it, rather writing is a process through which we discover something worth saying. It’s often through the act of writing we bring to existence ideas we never would have had otherwise.”

Ms. Miller then spoke directly to the students honored in her parents’ memory. “Though your motives for writing may be varied, as contemporary Kentucky writers dedicated to honing your craft and having a voice, you are engaging in work that is creative, intellectual, personal, and political. I know my parents would be honored, grateful, and immensely proud of your work and I cannot thank you enough for keeping their spirit alive. “

Dr. Hale shared his own thoughts on Mary Ellen Miller and how pleased he was in the renaming of the Celebration of Writing. “I was only fortunate enough to know Mary Ellen for about 5 years, but at the time I knew her, she had a tendency to put Jim Wayne's work front and center and hers to the back and offstage. Given what a powerful voice she had, and what a brazen feminist she was, some might find this propensity troubling. She appears to put herself in the position of helpmate. I must admit, I was annoyed with this tendency in her and she annoyed me almost as much as she delighted me, because she really was a gifted poet. However, the more I thought about this inclination to keep herself out of the limelight, I think it has nothing to do with gender, but instead of reflection of selfless graciousness as a human.”

Several students who were previous award-winning recipients of the Mary Ellen & Jim Wayne Miller Celebration of Writing were invited to read poems they felt reflective of the day’s celebration. These works included “Observer Effect”— Andrew Bergman, “John Lennon: A Day in the Rye”— Derek Ellis, “Athena’s Birth and Others Like It”— David Haydon, “Portrait of a Bowl of Beans”— Michaela Miller, and “Mother Tongue”— Alicyn Newman. There were also several messages sent by notable poets and authors who had been past presenters to be read by faculty members.

Dr. David LeNoir shared author Ed McClanahan’s first memory of meeting Mary Ellen Miller. “My first meeting with Mary Ellen in 1988, just a couple of months after a calamitous hailstorm and pounded Bowling Green into the temporary submission. As best I can recall, I'd been invited to read to an audience of high school students in the Governor's School for the Arts program which WKU was hosting. So, Mary Ellen who was to read with me, also drew the assignment of delivering me to the reading. She picked me up in an elderly white sedan, so pockmarked by hailstones it looked like a huge misshapen golf ball. But the battered old bus got us where we needed to go, and at our reading Mary Ellen graced us all with a lovely little bouquet of poems to galvanize our audience and absolutely stole the show. Mary Ellen was an accomplished poet and a dedicated, devoted teacher and she and Jim together constituted a literary power couple, in the league with Scott and Zelda or the Browning’s. They were wonderful people and I'm proud to have known them both.”

Noted author Silas House sent a recording of his own to celebrate the life of Mary Ellen Miller. “She either liked you or she didn’t, you always knew which camp you were in with Mary Ellen. She was bawdy and funny, and she delighted in shocking me. She was one of the first true academics to believe in me as a writer and validate me as a member of the literary community. When she put together the book Every Leaf a Mirror with Morris Grubbs, I was deeply honored that she trusted me to write the afterward. It really meant something to have Mary Ellen’s trust and friendship. I will always cherish both of those things and I'll always love her for being so quintessentially Mary Ellen — there was no one else like her.”