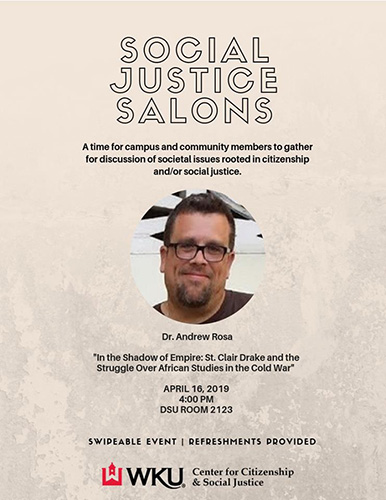 Dr. Rosa will present In the Shadow of Empire: St. Clair Drake and the Struggle Over African Studies in the Cold War from 4 to 5 p.m. Tuesday at Downing Student Union, room 2123.

Dr. Rosa said: “This talk considers the relationship between scholarship and activism by examining the place of the African American social anthropologist and Pan African activist St. Clair Drake in the building of an African Studies program at Roosevelt University in Chicago’s downtown Loop while working on behalf of African freedom struggles at the height of the Cold War. At a time when many African studies programs were dedicated to training African experts for the US Department of State, and when many Americans, in general, were ignorant about African affairs, Roosevelt’s African studies program, under Drake’s direction, established direct links with African nationalist leaders and movements. As a result, Roosevelt’s African Studies program emerged as a unique and important outlet for disseminating information on Africa to the larger American public and mobilizing transnational coalitions in support of African independence. In his rejection of a clear separation between scholarship and activism, school and society, and thinking and doing, Drake crossed multiple boundaries, becoming a model of intellectual activity that remains instructive and useful for our own times.”

Tuesday’s presentation is open to anyone interested. Refreshments will be provided.