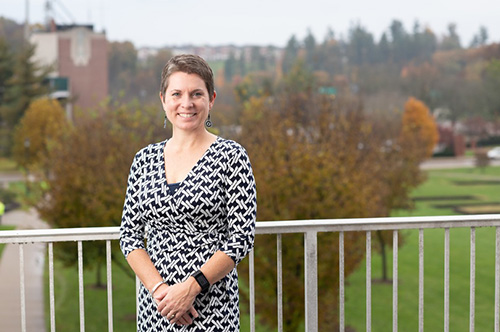 Dr. Basta, who has served as Chair of the Department of Social and Public Health for the College of Health Sciences and Professions at Ohio University since 2017, will assume her duties at WKU on July 1.

“Dr. Tania Basta is an outstanding choice for the College of Health and Human Services Deanship. Her community focused applied research and commitment to student success make her a great fit for this role at WKU,” Dr. Stevens said.

“My family and I are delighted to join Hilltopper Nation,” Dr. Basta said. “I was initially attracted to WKU because of the current Strategic Plan, ‘Climbing to Greater Heights,’ which aligns with my priorities of excellence in research, academics and community engagement. As a community-engaged researcher, I am thrilled to work for a university that includes community engagement as one of its main priorities for future growth.”

Dr. Basta earned her doctoral degree in Health Promotion and Behavior at the University of Georgia in 2006. She received her bachelor of science in Kinesology (1998) and master of public health in Community Health Education (2003) from Indiana University. Her research interests include rural public health, sexual health and infectious disease prevention.

“During my campus visit, WKU’s beautiful campus, the welcoming atmosphere, and the highly dedicated faculty and staff impressed me,” she said. “After meeting with administrators, faculty, staff and students, it was apparent that there is something very special about WKU and CHHS. I appreciate President Caboni’s enthusiasm and passion for WKU and its future. While I know that there will be challenges ahead for WKU and CHHS, I look forward to working with Acting Provost Cheryl Stevens, the entire academic leadership team, faculty, staff and students to turn these challenges into opportunities. Together, I am confident we can move WKU and CHHS ‘to greater heights’ throughout Kentucky and beyond.”

Dr. Basta, who has been a faculty member at Ohio University since 2006, had been an Associate Professor in Department of Social and Public Health since 2011, but was recently notified of her promotion to Full Professor. She also served as Interim Chair in 2016-17 and was selected as Chair in 2017 after a national search. She also was Assistant Professor of Community Health Services in the School of Public Health Sciences and Professions and served as a faculty member of Communication and Development Studies, affiliated faculty in African Studies Program and Latin American Studies and associate director and affiliated researcher for the Appalachian Rural Health Institute.