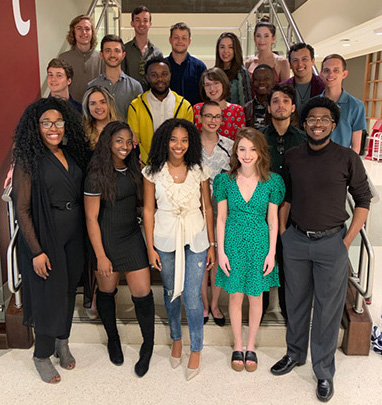 (Update: In mid-June the WKU Forensics Team was named the national champions of the 2019 American Forensic Association National Individual Events Tournament, after a two-month investigation found that two students of the original winning school had violated the league’s code of standards. Updated information is available at https://www.wku.edu/news/articles/index.php?view=article&articleid=7783)

WKU sent 20 competitors with a total of 66 entries to the national tournament. Of the 66 total entries, 36 advanced to quarterfinal rounds, 26 advanced to the semifinal round, and 12 events made it to the final rounds of competition. Last year, the team fielded 31 quarterfinalists, 21 semifinalists and 15 finalists.

Four members of the team were recognized for personal excellence across several events at the tournament, called the individual sweepstakes award: Andrea Ambam was recognized as the national champion; Casey Child placed fifth; Derek Collins was sixth, and Rickey WIlliams was 16th. Ambam won the same championship last year, and with it comes the honor of returning for one year with the perpetual award in individual sweepstakes, which is a 3-foot, 4-inch wooden trophy listing every individual sweeps winner since 1978. WKU has four students listed.

“I could not possibly be more proud of our students and coaches,” said WKU Director of Forensics Ganer Newman. “When we trailed two other teams entering the quarterfinal rounds of competition, our students fought hard to close the gap, producing an astonishing conversion rates and final round placements.”

Newman described moments that made this AFA tournament special. “Our coach Jeremy Frazer was recognized by the organization as the Outstanding New Coach. Also, seeing the nation recognize one of our hardest working seniors, Casey Child, as the fifth-place speaker in the country was joyful. It was incredible witnessing senior Andrea Ambam finish the tournament in historic fashion, advancing all six of her events to the final round, becoming only the second person in our program’s history to ever accomplish this feat. Her efforts culminated in her winning the Individual Sweepstakes Championship for her second consecutive year, becoming the ninth person to do so in the history of the AFA tournament. She is one of the greatest team leaders I have ever known, and I cannot think of a better way for her to finish her final AFA.”

Newman was also optimistic about the team’s future. “More than half of our out-round participants were either freshman or sophomore team members. Notably, sophomore transfer student Derek Collins won both the Informative Speaking and the Communication Analysis National Championships.”

Acknowledging the team’s challenges this year, Newman explained, “In my five seasons as director of this great program, I have never seen a more unified or harder working group of students and coaches. They hosted a record number of public showcases and our coaches put in countless hours preparing each student. And our season is not over yet. We will make adjustments and we all look forward to defending our national championship title at the NFA National Tournament in Santa Ana, California, next week.”

The team is preparing for this final tournament, the National Forensic Association National Speech and Debate Tournament, April 18-22 at the Santa Ana Unified School District in California. While the AFA national tournament offers events such as dramatic interpretation of literature, and both prepared and limited preparation speaking, the NFA national tournament also allows teams to compete in debate. Newman said the team hopes to bring back the NFA team championships in debate and individual events.

Thank you to all those who took the time to provide feedback on the Big Red Restart draft that we shared last week. We were pleased to receive more than 700 feedback forms.