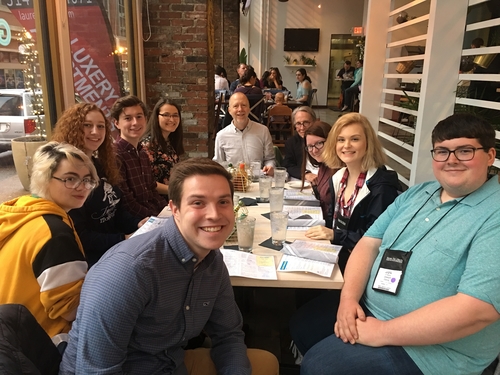 Each year, Sigma Tau Delta holds its annual international convention allowing hundreds of members and sponsors from around the world to share their work and discover new ideas regarding English and other related topics. Several WKU students had the opportunity to present their work at the conference and draw inspiration from their peers.

Hayley Watson is one of the students who presented at the convention. “The paper I presented at the conference was a short story I had written for a creative writing class I took in high school. It was about a funeral in a small town in the rural south and the reactions and emotions of the family and people of the town,” says Hayley. “I really enjoyed all the presentations and sessions students from our university participated in, particularly a creative writing session where students presented short stories with elements of magical realism. I loved the creativity and different writing styles.”

Carder Venable also benefitted greatly from attending the convention. “I had an awesome experience at the Sigma Tau Delta Convention. It really inspired me in my own work and ignited a new drive to further both my academic and creative writings,” says Carder. “Having so many English majors in one place built a collective positive energy about the future of liberal arts at the university level, which is something desperately needed at WKU. I came back with renewed passion for my craft.”

Natalie Turner says that conventions like Sigma Tau Delta’s helps her and others feel like their work has significance. “These conventions always inspire me to treat myself like a professional. I present my works, I discuss literary concepts, and I support my peers,” says Natalie. “There's something about the vibes there that makes me feel like my work matters. I'm glad to have opportunities like this that encourage me to widen my horizon instead of abandoning dreams I feel like I won't be able to attain.”

Professor Rutledge says that the convention provided a “sterling opportunity” for the students that attended. Dr. Hovet says, “As always, WKU English majors shined in their formal presentations and in their interactions with others at the conference.”