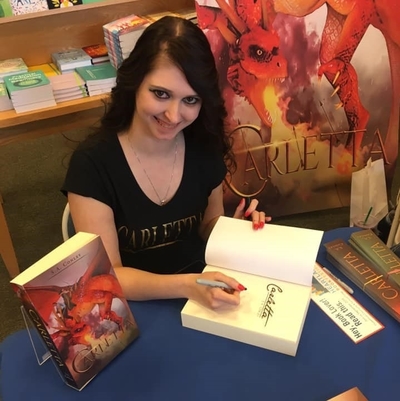 Samantha Ash is an alumnus of the WKU Department of English who has recently found success with her new fantasy novel, Carletta. Samantha recently took the time to answer some questions about her writing process, the story behind her new novel, and advice she has for up-and-coming writers. Samantha will be hosting a book signing for Carletta at the Bowling Green Barnes & Noble on Saturday, April 13 from 12:00-4:00.

Could you please give some information on your background and education?

I was born in Detroit, and I grew up in Elizabethtown, KY (where I wrote Carletta when I was 15). I began to study nursing in college, but a year and a half in, I changed schools and majors. I ended up at WKU where I received a bachelors in creative and business writing. My reason for my major change was so I could work more on Carletta. I knew that she needed a lot of work (being written by a high school student) and I wanted to study creative writing in order to make her the best I could. I currently live in Owensboro, working at the local paper.

Tell us about your new novel, Carletta.

Carletta is the story of Princess Bridgette Livingston. When she is 9, the commander of the Carlettian army (Horace) comes to her home, murders her father and brother, and abandons Bridgette, her mother and sisters on a deserted island to starve. She survives, and six years later she finds out she is the prophesied Destroyer of Evil. With this knowledge, she begins to wage a war on Horace and rid her homeland, and the magical world of Vesta, from evil. Along the way she encounters magical creatures such as mermaids, dragons, and the wily vermus vagus. She also learns valuable lessons about love, friendship, and that family isn’t always blood.

What inspired you to write this novel?

I wrote this novel when I was 15 years old. My little sister had a lot of trouble reading and writing, so I told her we were both going to write a story. I hoped this would help her. She wrote a short story and I wrote the first few chapters of Carletta. Over the years, I continued to work on Carletta and to expand the short story I had originally written into a novel.

Did you encounter any difficulties in writing the novel? If so, how did you overcome them?

I had several difficulties when writing Carletta. My biggest one was experience. At 15, I had not experienced any of the situations in the novel, so I researched a lot in order to make the scenes feel more real to the reader. The battle scenes were probably the hardest for me to write. I’ve never been in a battle, and I’m not a huge fan of blood and guts, so I had to read a lot of books on famous battles and sometimes even medical books in order to accurately describe wounds. Another difficulty was keeping with the time period. Though it is set in the magical world of Vesta, the clothing and architecture is close to 15th century England. I had to do a lot of research on food, drink and clothing from that era so that it would feel more real to the audience. Lastly, a big struggle of mine was grammar. I can write an amazing story, but I’m not always sure where all the grammar goes. My time at WKU helped this significantly.

What are you hoping your audience will come away with after reading Carletta?

I hope my audience will not only enjoy the storyline, but will also come away with some life lessons. I want young girls to realize that you can be a princess and a warrior. Your personality doesn’t have to be one or the other, because Bridgette is both. I want young men who read the novel to come away with the idea that it is a strength to be sensitive, the way my main male character Alan is sensitive and strong. I want teenagers who read it to be inspired to do great things with their lives. Even though Bridgette is 15 in the novel, she still goes out and rides a flying horse, befriends a dragon, and saves the world. But she never forgets who she is. She is true to herself. I also hope this novel inspires teen and young adult writers to write and strive to be published. Even if it is never a New York Times Bestseller, write the story anyway. Get it into the hands of the readers. You never know what lives your story will change.

How did your time at WKU contribute to your success today?

My time at WKU helped to hone my writing skills. I began to write more with an adult, worldlier perspective instead of a child-like, innocent perspective. My characters were no longer afraid to get their hands dirty in battle or to embrace their evil side.

What advice would you give to aspiring writers here at WKU?

I would tell them to never give up writing. I used the first chapter in a few of my writer workshop classes, and only a handful of kids liked it. However, it is now published and my book signings have sold out. So if someone doesn’t like your story, oh well. It isn’t their story to tell. It’s yours. And even if the people in your English classes are never touched by your stories, someone in the public later on might be. You can do anything you want as long as you believe in yourself. Never let anyone define what you can and cannot do. You make your own destiny.

Thank you to all those who took the time to provide feedback on the Big Red Restart draft that we shared last week. We were pleased to receive more than 700 feedback forms.