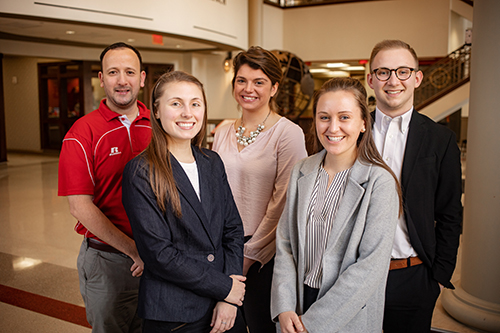 Four students in WKU’s Arabic language program will be traveling to Qatar in March to compete in the fifth International Universities Debating Championship.

WKU will be one of five U.S. universities participating in the international competition, hosted by QatarDebate, brings together Arabic and non-Arabic speaking students from around the world to Doha, Qatar, for six days in mid-March.

Since being selected for the team in late November, seniors Madi Crawford of Hendersonville, Tennessee, Keightley Dudgeon of Crestwood, Kassidy Orrender of Crestwood and Noah A. Stevens of Elizabethtown have been preparing for the competition and are enrolled this spring in an Arabic debate course taught by Lhousseine Guerwane.

“The students have been preparing since they were selected, even during the winter break they were submitting two assignments a week that I corrected and gave feedback on as they learn how to debate and improve their Arabic language skills,” Guerwane said. “The students also attend the Arabic Debate Club two hours a week and submit online assignments weekly. In addition to learning about debate and practicing debate skills, students also are working on exercises to improve their listening skills, pronunciation, body language, confidence and vocabulary.”

WKU launched its Arabic language major in 2014 and the program has grown to more than 50 students. This will be the third year Guerwane has taken students to debate competition in Qatar.

“Because WKU has fielded a team for the QatarDebate Championships twice since I began studying Arabic, I have seen the success of other students from the program and this made being selected to participate on behalf of the university and the U.S. the ultimate goal of my Arabic education,” said Stevens, who is majoring in International Affairs, Arabic and Middle East Studies.

While the Arabic program was one of the primary reasons Stevens decided to enroll at WKU, his three teammates learned about the major once they arrived on campus. And they’re ready to let other students know about the opportunities offered by the Arabic program.

“If you have the opportunity and even the slightest interest in learning a new language, do it,” said Orrender, who is majoring in Arabic with a minor in Political Science. “The things you learn about the world from stepping into a new language is something you won’t find in any other major. Our Arabic professors are incredible -- easily the kindest, hardest-working, most dedicated people I have ever met. They are so passionate about helping students succeed and work hard to ensure that the learning process is fun. There are few things I believe are more beneficial to your understanding of the world than learning a new language, and few things that will make you more competitive in the job market after graduation.”

Dudgeon, who is majoring in Arabic and Teaching English as a Second Language, encourages prospective students to consider the Arabic major. “The department is well-equipped with dedicated and enthusiastic professors who work passionately to provide students with every possible opportunity for successful language acquisition,” she said. “There is also a great takeaway past learning the language itself. You will learn about the Middle Eastern culture through Arabic language learning. And hopefully, you will meet people who speak the language too.”

Speaking to someone in their native language is important, Crawford said. “I think we all just want to be heard in this world and the fact that you have the chance to understand others who speak a different language is a once in a lifetime opportunity,” said Crawford, who is majoring in Criminology and Arabic with a minor in Sociology. “I fell in love with the language and the culture, and you can, too.”