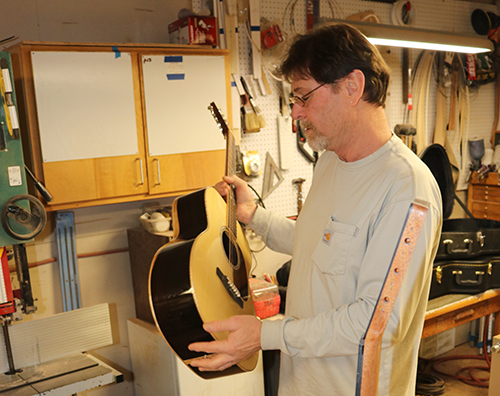 The Kentucky Folklife Program, part of WKU's Department of Folk Studies and Anthropology, and collaborating partner the Kentucky Arts Council announce that luthier Glespie Ray Deweese of Bowling Green will be the recipient of the 2018 Homer Ledford Award.

Since 2007, this award in honor and memory of master luthier, musician and educator Homer Ledford (1927-2006) has been given to Kentucky luthiers who have demonstrated outstanding craftsmanship, mastery of making and setting up instruments for excellent tone and playability, and who have been recognized by the communities of musicians they serve.

Deweese grew up in Butler County, where he learned of woodworking from his grandmother’s neighbor, celebrated Kentucky long rifle maker Hershel House. Deweese is known for building traditional, jumbo, dreadnought, and 000 Martin style acoustic guitars, but his works also include electric six-string and bass guitars. In addition to crafting guitars, Deweese is skilled at performing standard maintenance and repairs, including neck and bridge adjustments, refinishing, and fret work to a variety of stringed instruments.

From a young age, Deweese would watch House creates rifles. “I fell in love with wood from that point on.” Deweese’s love for the native woods of Kentucky shows in his work, as he favors curly maple and sycamore for his guitars, even saying that he thinks “they beat any imported rosewood.”

Graham Hudspeth, who nominated Deweese, said: “There is something so special about a custom-made guitar. I own four, three of them are Glespies.” Hudspeth also notes that those who have played one of Deweese’s guitars find themselves amazed at the tone and feel of the guitars as they are played.

The Kentucky Folklife Program, housed within the Department of Folk Studies and Anthropology at Western Kentucky University, has a long history of working with the Kentucky Arts Council to document, present, conserve and teach the public about the rich heritage of folk and traditional artists working in Kentucky today. This award celebrates the legacy and creative industry of traditional stringed instrument makers who are vital to Kentucky musical culture.

This award is given in honor and memory of master luthier, musician and educator Homer Ledford (1927-2006). Known for his superb craftsmanship, impressive productivity, inspired innovations, generous spirit, and willingness to teach anyone interested in his art, Ledford had a profound impact on musical communities throughout Kentucky and far beyond. Many luthiers and musicians remember visiting his basement shop in Winchester, where he immersed himself in his work while sharing techniques, wisdom, and stories surrounding his cultural heritage. Ledford’s legacy lives on among today’s musical craftspeople, and this award symbolizes that legacy.

Brent Bjorkman, Director of the Kentucky Folklife Program, said: “For so many of us who had the privilege to get to know Homer during his life and experience immense talent as both an instrument maker and performer, this award symbolizes something very central to his character: his attention to detail, his giving nature toward musicians in sharing himself so openly, and his desire to serve his community as an ambassador for Kentucky music.”

The award ceremony will take place at this year’s Kentucky Crafted Market 2019 on March 16 at 5 p.m. at the Kentucky Horse Park Alltech Arena in Lexington.