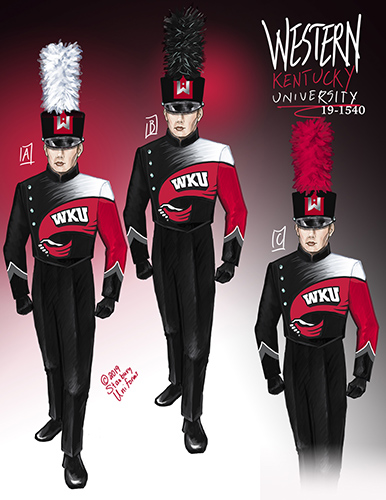 The largest marching band in the Commonwealth will take the field in bold new uniforms this fall at WKU.

After years of increasing membership, up 115 percent over the past 10 years, the Big Red Marching Band outgrew the number of uniforms that were purchased nine years ago. Last season the band took the field in sweat outfits.

Now, multiple partners, including WKU Athletics, Potter College of Arts & Letters, the Office of the President, alumni and friends, rallied together to make new uniforms possible.

“The Big Red Marching Band is one of the university’s most visible organizations representing the institution in parades, marching contests and athletics events,” WKU President Timothy C. Caboni said. “When they take the field, they are introduced as the ‘Pride of the Hilltoppers.’ The new uniforms, and the collaborative effort to support these students, reflect that pride.

“Additionally, members of the band persist at a significantly higher rate than the university average. It essentially is a large learning community.”

President Caboni said band members “are tremendously talented students and we as a campus had to find a way to provide uniforms that complimented what they are as an organization.”

Gary Schallert, Director of Bands at WKU, said a group began working with a variety of sources to pull together the necessary one-time funding to outfit nearly 300 band members. Now that the design has been selected, the bidding process has started to find a vendor and determine the final cost.

“I assembled a representative group of BRMB students, and they were unanimous in selecting the design,” he said. “We feel it is bold, colorful, traditional yet contemporary, and very ‘cool.’ The students said they would be proud to wear this uniform.”

Dr. Schallert said the new uniforms would be “wash and wear” and made of lighter weight fabric that will remain cooler in hot weather, be easier to launder and last longer. They are also adjustable to eliminate the need for costly annual alterations, he said.

“The Big Red Marching Band is a very diverse group of students, including the number of majors represented in our membership,” Dr. Schallert said. “To have these various areas step up to show they value the time, effort and talent our students expend in support of our university is tremendous.”

Justice Adams, a sophomore music education major from Bowling Green, said it was encouraging to see the campus support the marching band.

“These new uniforms will give us a fresh look that will last for years to come and will give us a refined sense of pride that embodies the Spirit of WKU,” said Adams, who plays trombone. “We are thankful for the university's continued support and dedication to its students and to the WKU Music Department.”