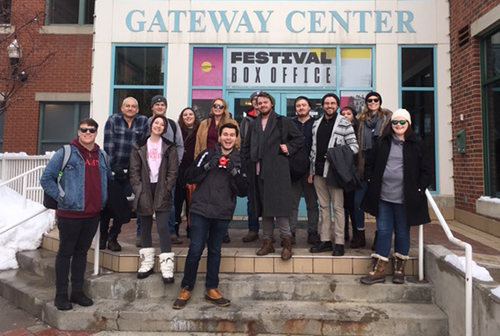 The Sundance Film Festival in Park City, Utah, is the ultimate gathering of original storytellers.

For five of the last six years, WKU students have gotten to attend.

WKU's Amy Bingham has more in the View from the Hill.

Dramatic features, documentaries, short films and more. The Sundance Film Festival is a smorgasbord of creative content. Right in the middle of all the celebrities and filmmakers? More than a dozen WKU students soaking it all in.

Since 1985, Park City, Utah, has taken on a whole new identity for the Sundance Film Festival.

“Just the city is very cool. It almost seems fake.”

“Every film the students go to they have an introduction, they see the film then the director, writers, cinematographers and actors, they’re all there.  That’s what’s beautiful it’s such a learning environment for them.  You can’t duplicate that in a classroom with just a screening. “

“It was really enlightening to hear especially right after to kind of add to your reflection on what you just watched.”

With the help of the study away office, film professors Dawn Hall and Ted Hovet began offering the class in 2014.

“Every year some students have never been on an airplane before, let alone gone to some huge festival with celebrities and filmmakers and everything.”

Film major Katie Babbage has her sites set on being the Director of Photography, a director’s right hand.

And Honors sophomore Cameron Fontes, who is minoring in film, says he learned so much.

“It really was cool to see first hand from writers and directors how they craft story and how collaborating, they come together and work to create a story and develop it.”

The students said there were plenty of celebrity sightings at Sundance including  Glenn Close, Jason Momoa, Pete Davidson and Kevin Bacon. WKU began offering a film major in 2010 and it has grown from less than 50 students to 140.