2018 one of wettest years on record in Kentucky 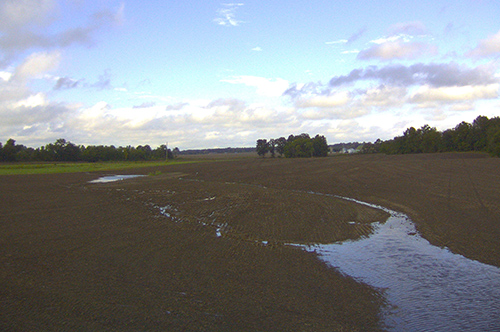 The camera at the Kentucky Mesonet at WKU station in Henderson County captured this image after rainfall on Sept. 25, 2018.

The final results are in: 2018 was one of the wettest years on record in Kentucky and throughout much of the Midwest.

Stations comprising the Kentucky Mesonet at WKU, the state’s official source of climatological observations, reported a statewide average of 63.08 inches of precipitation for the year. According to data available through the Midwestern Regional Climate Center, the record wettest year in Kentucky dating back to 1895 is 2011 with a statewide average of 64.35 inches.

State climatologist Stuart Foster, director of the Kentucky Climate Center and the Kentucky Mesonet at WKU, noted that precipitation was well distributed throughout the year. “The wettest months were February and September, but no month averaged more than 10 inches,” he said. “As a result, there was only minor river flooding reported in 2018. In contrast, the record setting year of 2011 included as much as 20 inches of rain in some areas during April and early May, resulting in extensive flooding along the lower reaches of the Ohio River and its tributaries.”

Catie Duchette, a graduate assistant in the Kinesiology program, is the winner of the inaugural WKU 3MT Competition.

Learn.Org has recognized WKU’s Bachelor of Organizational Leadership as a top online degree.