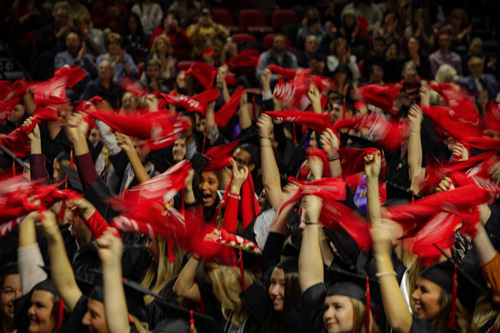 The fall graduates are encouraged to participate in Topper Walk on as part of WKU’s 185th Commencement ceremony on May 10.

Emilie Gill, an Art History and Visual Studies double major from Allensville, was recognized as the Ogden Foundation Scholar during the Potter College of Arts & Letters ceremony. WKU’s top undergraduate academic award is presented to one graduating baccalaureate degree senior who has demonstrated exceptional academic achievement and outstanding university and civic engagement.

Gill, the daughter of Tyler and Sylvia Gill of Allensville, is a graduate of The Mahurin Honors College, had a 4.0 grade-point average, participated in four study abroad trips to New Zealand, Austria and Ireland; attended a workshop at the Atlanta Center for Puppetry Arts; designed props and puppets for the Phoenix Theatre in Bowling Green; interned at Mammoth Cave National Park; and volunteered with the Governor’s School for the Arts. Her awards and scholarships include the Art Department’s Schierferdecker/Lester Award, the Jarve Endowment Scholarship for study abroad in New Zealand, WKU’s 1906 Founders Scholarship and the Potter College Outstanding Student Award in Visual Studies. Her work also was selected as the official logo for WKU’s International Year of Cuba.

“Thank you also to the faculty at WKU, particularly within the Department of Art and Department of Geography and Geology who have supported and guided my dreams without question for the last four years. While so much knowledge has strengthened my wisdom and confidence during my time here, the most important thing you have taught me is that no matter where our paths lead from here, I will always be able to find a home and a creative family like the one I have found on campus who I celebrate and who I can serve in return.”

Gill also was recognized as one of 14 Scholars of the College, the baccalaureate degree students in each undergraduate college with the highest cumulative overall grade point average and a minimum of 60 semester hours earned in residence, were recognized at each ceremony.

Ogden College of Science and Engineering

College of Health and Human Services