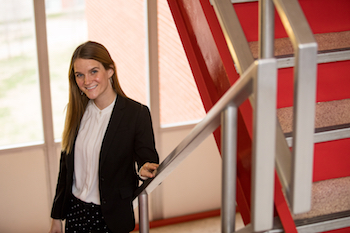 Hope Thompson, a Strategic Marketing graduating senior from Birmingham, Alabama, has made her mark within the Gordon Ford College of Business through networking and getting involved. Her role with the WKU ENACTUS entrepreneurship team has enabled her to make a tangible impact on the Bowling Green community.

“We created an inventory management system for Hotel, Inc. so that they can properly order food that they need. We also implemented the Bowling Green Night Market in Stadium Park Plaza. We wanted to give Bowing Green entrepreneurs a place that they could go that had low barriers of entry, but also a good location as well.” Thompson explained that the Bowling Green Night Market is located in a Tax Increment Financing District (TIF), which gives a portion of tax revenues earned back to the local businesses established in the area. “We are trying to uplift that community as well and get some economic development down there.”

Another project Thompson and the ENACTUS team has been working on is called Project Job Bus.  “Manufacturers in Bowling Green have a problem that a lot of the people that they want to employ can’t get there, so we have had multiple meetings where we are trying to acquire a van so that we can provide a means for people to get from point A to point B, for refugees especially, who are a huge pool for that service,” she explained.

Thompson said getting involved and getting to know her professors has made an impact on her success as a student at WKU, “People talk about networking, but they do it for a good reason,” she said, “I made an effort to get to know a lot of my professors personally.  I just go in their offices and hang out with them, talk to them and let them know what my interests are, and talk to them about what they care about. They have been tremendous in helping me find jobs. Opportunities have just flown in because I have made the connection and I networked, so they know that I have the potential to do things.”

Thompson believes that the Spirit of WKU means personal growth. “I came here from Alabama, I didn’t know anybody, so I think that Spirit just found its way in me and allowed me to be the best person I could be, to get involved, to make a mark here, but not just for myself, but because everyone is so great here that you want to get involved.”