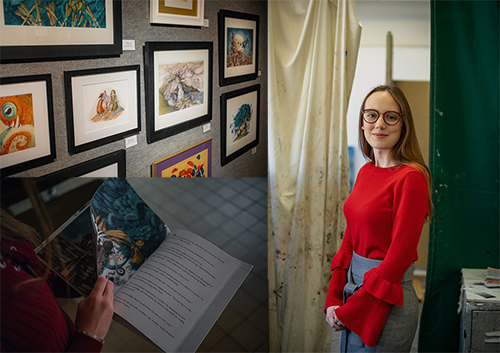 Emilie Gill will be recognized as the Ogden Foundation Scholar for the fall 2018 semester. Her work is on display as part of the graduating seniors exhibit at the Ivan Wilson Fine Arts Center. Her work also includes a 52-page picture book created as part of her thesis for the Mahurin Honors College. (WKU photos by Bryan Lemon)

But the WKU senior never closed the book on her interest in picture books and plans to pursue a career as a book illustrator and visual storyteller.

“Our world has so many wonderful languages and cultures, and technology has made it very easy to communicate and exchange ideas,” Gill said. “However, unfamiliar ideas can be difficult to understand and perhaps even appear intimidating, especially when verbal or written language cannot be exactly translated. Visual storytelling such as that found in picture books takes that daunting subject matter and approaches it with wit, innocence and wonder, making connections through entities to which all audiences can relate, such as color, emotions and even animals.”

Gill, the daughter of Tyler and Sylvia Gill of Allensville, will be recognized Saturday (Dec. 15) as the Ogden Foundation Scholar during the Potter College of Arts & Letters ceremony. WKU’s top undergraduate academic award is presented to one graduating baccalaureate degree senior who has demonstrated exceptional academic achievement and outstanding university and civic engagement.

“As an art history/visual studies double major with a geography minor, WKU has taught me that any experience, whether in the sciences or arts, no matter how challenging, is an opportunity to learn and improve my craft,” Gill said.

Gill, who plans to begin graduate school in 2019, is a student in the Mahurin Honors College; participated in four study abroad trips to New Zealand, Austria and Ireland; attended a  workshop at the Atlanta Center for Puppetry Arts and learned about the history and craft of puppetry; designed props and puppets for the Phoenix Theatre in Bowling Green; interned at Mammoth Cave National Park; and volunteered with the Governor’s School for the Arts. Her awards and scholarships include the Art Department’s Schierferdecker/Lester Award, the Jarve Endowment Scholarship for study abroad in New Zealand, WKU’s 1906 Founders Scholarship and the Potter College Outstanding Student Award in Visual Studies. Her work also was selected as the official logo for WKU’s International Year of Cuba.

“I am incredibly grateful to the faculty’s willingness to allow me to explore my career goals freely on campus and on my programs abroad, and I am humbled by the knowledge that students at WKU can quietly, steadily work toward their goals, and their persistence will be recognized and rewarded. I am eager to return this kindness to both WKU and my community.”

Kristina Arnold, head of the Art Department, said Gill used her coursework and faculty expertise in the department to design her own course of study. “As a testament to Emilie’s creativity, work ethic, abilities and leadership role within the department, she is now claimed by all our major academic areas – Art History, Studio Art, Graphic Design and Art Education,” Arnold said. “While students often dip their toes into multiple area waters, each program is distinct and time-consuming enough that it is nearly unheard of for a student to be productive in all four. During her time as a student, Emilie’s coursework, interests, engagement and scholarship has bridged them all.”

Gill has been interested in storytelling for as long as she can remember. “I memorized all my books as a toddler and recited them aloud to myself, even before I could read. I was fascinated by the fact that one does not have to tell ‘real’ stories to impart truth, and that some truths can be more powerful and approachable as a fictional story,” she said. “My family members aren’t professional storytellers, but they taught me that people respond more to information in a story format. They made sure to show me how all disciplines -- science, the arts, history -- are connected because we depend on stories to more easily understand each other and to solve problems related to each discipline. And rather than preaching to me about how they were right about this, my parents bought me picture books and took me to zoos and museums and allowed me to come to that conclusion myself.”

A semester in New Zealand at Massey University in Wellington was a pivotal moment for Gill. As a high school student, she had traveled to New Zealand with her parents and had seen the university during that trip. She never expected to study there, but when she wasn’t able to attend Harlaxton College in England for the spring 2016 semester, Gill explored other options.

“I typed in New Zealand, illustration and Wellington and the exact program I was looking for popped up,” Gill said.

While studying illustration in Wellington, Gill had the opportunity to participate in workshops and conferences that featured artists, designers and others who had worked on feature films produced in New Zealand like the Lord of the Rings and the Chronicles of Narnia.

During summer programs in Austria and Ireland, Gill was able to combine her interests in illustrations and cultural geography. “I strengthen those connections by combining art and science in my work,” she said.

During the fall 2018 semester, Gill worked as an intern at Mammoth Cave National Park’s Interpretation and Environmental Education department. “Whether I am helping conduct experiments at elementary schools or identifying flora for an international visitor experiencing deciduous trees for the first time, I find people are most engaged in learning and problem-solving via creative activities and relatable stories,” she said.

In "A Thousand Words: Celebrating the Power of Visual Language in Picture Books," her thesis for the Mahurin Honors College, Gill conducted extensive research on the history of illustrated books and the development of the picture book market nationally and internationally.

Using techniques from books she had researched, Gill wrote and illustrated “The Murmuring,” a 52-page picture book. “I made my story in order to explore techniques that make picture books communicate successfully, such as color, style and more,” she said. “It is a short story modeled after traditional folktales as well as those of Hans Christian Andersen and Oscar Wilde. In order to keep with the theme of language and communication, the story explores the idea of music and sound as a language and visible force through the portrayal of magic islands, massive pipe organs, and giant blue birds. A ‘murmuring’ or ‘murmuration’ is actually a name for a flock of starlings, which I thought was appropriate since the term refers to both gentle sound and a species of songbird.”

Gill finds inspiration in strange or extinct animals, landscapes, farm life, music, folktales and fairy stories of writers like Hans Christian Andersen, Oscar Wilde and C.S. Lewis. Illustrations highlighting those inspirations -- as well as her first piece of artwork, a finger painting done as a toddler in 1997 -- are on display in the graduating seniors exhibit at WKU’s Ivan Wilson Fine Arts Center.

“I hope my work can contribute to global communication by eliminating fear through understanding and inviting audiences to explore difficult topics through whimsy and wonder,” Gill said. “They can approach my visual stories comfortably, as a form of escape, but my hope is that they will soon realize fairy stories function not just as escapism but as a realm in which to explore aspects of reality with more clarity, to contemplate solutions to problems, and to return with the inspiration to help improve the real world.”