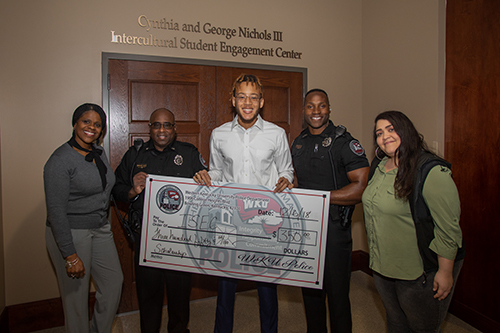 On Thursday (Dec. 6), the WKU Police Department presented its first Face of a Scholar scholarship to Darren Griggs of Louisville.

Griggs, a first-year student majoring in Exercise Science, was identified by the Intercultural Student Engagement Center (ISEC) after WKU Police presented the idea of the inaugural scholarship that stemmed from the police department making a change in policy.

“One of our policies was that police officers could not wear facial hair in uniform. So, what we did was reach out to the university community to see what their thoughts were,” Chief Mitch Walker said. “We got an overwhelming response that they did not care, and it would be fine for us to that.”

The survey of 800 WKU faculty/staff resulted in more than 80 percent of respondents having no issue with police having facial hair. Officers were invited to donate $25 annually to the Intercultural Student Engagement Center if they wanted to wear facial hair. Fourteen officers joined in support.

At the check presentation, ISEC Program Coordinator Kristina Gamble expressed to Griggs why he was selected for the award. “Even when I am not around, other people tell me positive things about you,” Gamble said. “So, when I think about working with our WKU Police Department, I think about that ideal citizen. To me, you are that person, in and out of the classroom.”

When asked how he planned to use the award, Griggs showed his true character. “If there is anything left on my tuition, this will probably go toward that, but I feel like I have most of that taken care of,” he said.  “I know a lot of people here (in the ISEC) that do not have tuition paid for. So, maybe I can see if they need it. The goal in here (ISEC) is to make sure everyone has what they need, and no one needs to struggle.”

The Face of a Scholar is presented by the WKU Police Department each year for the Intercultural Student Engagement Center.  The criteria are included below: