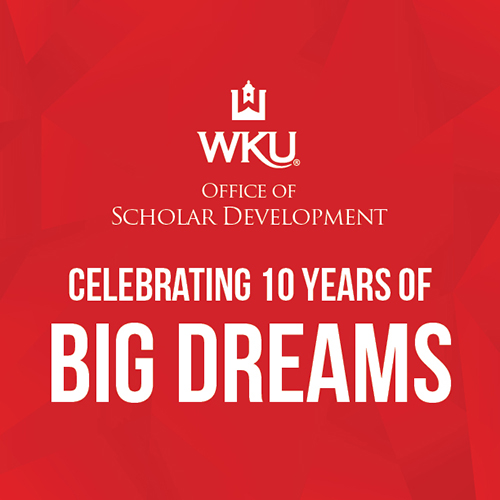 The 2018-19 academic year marks the tenth year since the Office of Scholar Development at Western Kentucky University was created. Established in 2008, OSD helps WKU students apply for and win nationally competitive scholarships.

According to Dr. Audra Jennings, director of OSD and associate professor of history, these successes are due to the support the WKU and Bowling Green communities provide to students.

“When I joined OSD in 2009, few WKU students applied for national awards. By comparison, 176 WKU students applied and earned recognition 80 times in national scholarship competitions in the last year alone,” she said. “This growth is indicative of the faculty’s commitment to undergraduate mentorship and research, internationalization, and community engagement.”

A great example of this commitment to undergraduate mentorship can be found in the Fulbright U.S. Student Program, said Dr. Melinda Grimsley-Smith, OSD’s coordinator of international scholarships and Fulbright Program Advisor.

WKU has been recognized as a Fulbright top-producing institution for four consecutive years and five times overall.  From the Fulbright Program’s creation in 1946 to 2008, only 8 WKU students were awarded Fulbright grants.  However, since 2008, more than 50 WKU students and alumni earned grants.

OSD will celebrate its tenth anniversary at Homecoming 2018 on October 27, 2018.  OSD invites alumni, current students, and friends of OSD to join the celebration from 2-6pm on South Lawn.

“I hope that anyone interested in helping shape the next ten years of big dreams will contact us,” Dr. Jennings said. “We are always seeking new enthusiasm, talent and expertise to support WKU students.”

A more detailed history of OSD and instructions on how to RSVP for OSD’s Homecoming Celebration can be found at: wku.edu/osd/anniversary.