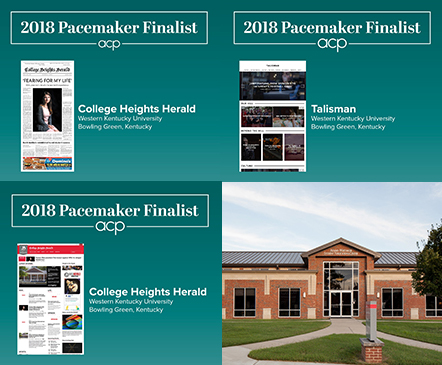 The College Heights Herald and the Talisman are finalists for three national Pacemaker Awards in 2018 – the highest honor a student-run publication can receive:

The Pacemakers, awarded by the Associated Collegiate Press, are judged on the overall quality of the publications – everything from reporting and writing to visual journalism and design.

In addition, 16 students on the staffs of the Herald and Talisman are finalists for ACP national individual awards in nine categories.

“This speaks to the quality of work our students produce,” said Chuck Clark, director of WKU Student Publications. “Yes, they are learning, with all that entails. But these three finalist positions tell us that our students are taking what they learn in the classroom and applying it in a real-world setting, and they’re doing that at a very high level.”

Winners of the 2018 Pacemaker Awards will be announced Oct. 27 at the National College Media Convention in Louisville.

“The thing about regularly placing as finalists and winning Pacemakers is that it makes it easy to take that level of quality for granted,” Clark said. “Our competitors are exceptional. But what makes our publications at WKU so consistently strong is our students’ hard work and dedication.”

Here are the Student Publications finalists for individual national awards from ACP: