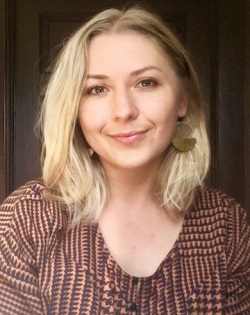 Dr. Marla Zubel, assistant professor of English, has been named Fellow of the Robert Penn Warren Center at WKU for the 2018-2019 academic year.

Dr. Zubel received her Ph.D. in comparative literature from the University of Minnesota. Prior to joining the English faculty in 2017 she worked as an acquisitions editor at Wesleyan University Press. At WKU she teaches and researches 20th century world literature and film.

Founded in 1987, the Center for Robert Penn Warren Studies honors the legacy and achievements of native Kentuckian Robert Penn Warren, the first poet laureate of the United States and the only person who has received Pulitzer Prizes for both poetry and fiction.

In collaboration with the Robert Penn Warren Circle, Dr. Zubel will help to coordinate the Warren-Brooks Award, presented each year to honor an outstanding work of literary scholarship that embodies the spirit, scope, and integrity of the work produced by Warren and his frequent collaborator, Brooks. Dr. Zubel will also help to organize the annual symposium on Warren, which will take place in April at WKU.

Dr. Robert Hale, Co-director of the RPW Center and Head of English at WKU, said: “Dr. Zubel is a wonderfully organized colleague and will continue the fine work of the past RPW Fellow, Dr. Nicolette Bruner. Dr. Zubel also brings a passion for literature and pedagogy that will serve the Center well.”