Libraries professor participated in Sinologist and translator workshop in Beijing 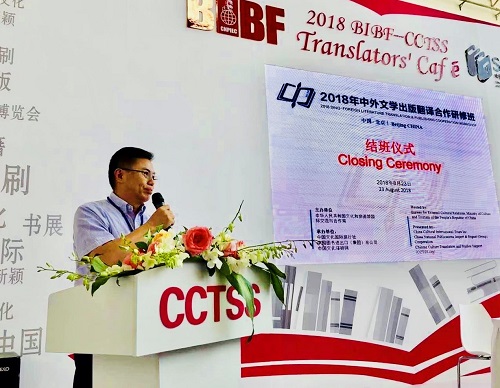 Haiwang Yuan, professor of the Department of Library Public Services, WKU Libraries, was among 41 Sinologists and translators from 35 countries attending the 2018 Sino-foreign Literature Translation and Publishing Cooperation Workshop hosted by the Bureau for External Cultural Relations under China’s Ministry of Culture and Tourism. Held from August 20-24 in Beijing, capital of China, the workshop served as a platform for strengthening intellectual and cultural exchanges between China and other countries in the world, deepening people-to-people understanding, and promoting in-depth cooperation in the field of literature, according to China Daily.

According to Yuan, the invitation was an unexpected surprise and difficult to receive with English as a second language. “I feel rewarded to get this type of recognition after years of hard work on research. I have always seen myself as a cultural bridge. The workshop has opened up more opportunities for me to contribute to the exchange and mutual understanding between the Chinese and American cultures.”

Zhi Qi, deputy director of the Foreign Affairs Bureau at China’s Ministry of Culture and Tourism spoke at the opening ceremony on August 20. “The workshop will foster closer ties between China and international translators, and introduce more Chinese literature to the world,” said Qi.

The foreign Sinologists and translators had dialogues among themselves and with Chinese writers and publishers to discuss publishing and translation issues in 18 forums during the workshop. Yuan presided over one of the forums and gave a keynote remark at the closing ceremony.

Haiwang Yuan has authored/edited and co-authored/edited six monographs pertaining to the Chinese culture and has published over two dozen articles in academic journals, including College & Research Libraries and Library Administration and Management.

For more details on the workshop, please visit: