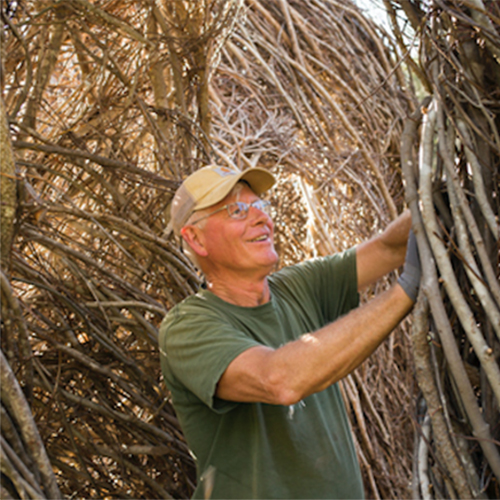 Bowling Green, Kentucky- WKU’s Cultural Enhancement Series and the Kentucky Museum are proud to host award winning artist Patrick Dougherty October 1-19, 2018 on WKU’s campus in Bowling Green, Ky. Dougherty creates large scale environmental sculptures made from intertwined tree saplings. His next installation will be located in front of the Kentucky Museum. This installation is open to the public at all times during construction to view or to help build.

Combining his carpentry skills with his love of nature, Dougherty began to learn more about primitive techniques of building and to experiment with tree saplings as construction material. In 1982 his first work, Maple Body Wrap, was included in the North Carolina Biennial Artists’ Exhibition, sponsored by the North Carolina Museum of Art. In the following year, he had his first one-person show entitled, Waitin’ It Out in Maple at the Southeastern Center for Contemporary Art in Winston-Salem, North Carolina.

His work quickly evolved from single pieces on conventional pedestals to monumental scale environmental works, which required saplings by the truckloads. Over the last thirty years, he has built over 250 of these works, and become internationally acclaimed. His sculpture has been seen worldwide---from Scotland to Japan to Brussels, and all over the United States.

The sculpture will be located in front of the historic entrance of the Kentucky Museum. “The Kentucky Museum is extremely excited to be the home for this Cultural Enhancement- sponsored long-term exhibit to be installed on our front lawn beginning this October”, said Brent Bjorkman, Director of the Kentucky Museum and Kentucky Folklife Program, “Patrick’s whimsical large-scale creations harvested and assembled out of local saplings and created on site with the assistance of scores of volunteers is, quite literally, a great example of community building from the ground up.”

During Dougherty’s residency at WKU the campus and community is invited visit and observe during building times, which run 8:00 a.m.-12:00 p.m. and 1:00 p.m.-5:00 p.m. from Monday through Friday. By signing up in advance to participate, groups and individuals are also welcome to volunteer to help build the sculpture.

Information about volunteering for this project can be found at www.wku.edu/grow/stickwork or by visiting the Kentucky Museum or by calling 270-745-2592 Tuesday-Saturday 9:00 a.m.-4:00 p.m. CST. You can learn more about Dougherty’s work at www.stickwork.net.