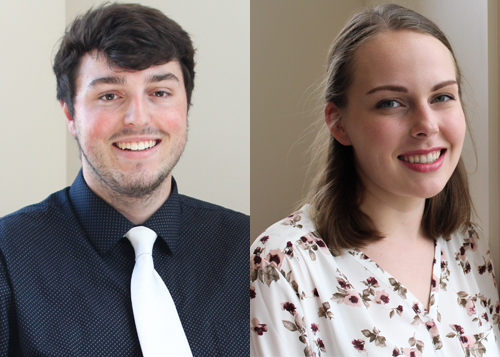 Photo Caption: Isaac Keller (left) and Rachel Hunter (right) will study at Aberystwyth University and the University of Sussex, respectively, this summer.

For the second year in a row, two WKU students have been selected to participate in US-UK Fulbright Summer Institutes in the United Kingdom. Rachel Hunter of Owensboro and Isaac Keller of Kansas City, Missouri are the seventh and eighth WKU students to be selected for the prestigious nationally-competitive program since 2012.

Hunter is a first-year English major and the daughter of Pam Hunter. She will study British culture through children’s literature at the University of Sussex in Brighton. Because of her own childhood experience exploring worlds beyond her home and community through children’s literature, she is particularly interested in its potential to develop young readers’ knowledge, sense of possibility and ambition.

While exploring other places and times through literature and theater, Hunter has developed an appreciation for value hidden in everyday life. Throughout high school, she learned both practical skills and less tangible life lessons working in the kitchen of a neighborhood bar and grill. At the same time, she founded and coordinated her school’s first cooking team to compete in the Kentucky Farm to School competition, placing third in state competition two years in a row and speaking with Kentucky’s delegation in Congress before they voted on a bill involving school nutrition. While she looks forward to visiting iconic sights like Shakespeare’s Globe Theatre, she is just as excited to experience everyday life in the UK.

“It’s an incredible opportunity to study British literature in the UK where I can get a full sense of the mood of the novels I love,” Hunter said. She plans to pursue a PhD in literature one day, so she looks forward to experiencing the different teaching culture with British professors at the University of Sussex.

Keller is a first-year political science major and the son of Nicole Keller. He will study contemporary issues in identity and nationhood at Aberystwyth University in Wales. He is a member of WKU’s national championship Forensics Team and recently placed ninth in debate and was a double-octofinalist in Lincoln-Douglas Debate at the National Forensic Association National Tournament.

Keller’s experience growing up on the lower end of a socioeconomically divided community in Kansas gave rise to an interest in income inequality and public policy. High school debate gave him a vehicle to shape and articulate his ideas, while experience in political campaigns has inspired his plans to seek elected office one day. All of the above drew him to the summer institute at Aberystwyth University.

Both students worked with Dr. Melinda Grimsley-Smith, coordinator of international scholarships in the Office of Scholar Development, in preparing their applications.

“The US-UK Fulbright Summer Institutes are highly competitive, but that shouldn’t discourage any eligible first- or second-year WKU student from applying,” said Dr. Grimsley-Smith. “Every year, applicants say that the process can be demanding, but it’s a wonderful way to learn about themselves, what’s important to them and how they want to invest their time and energy while at WKU and beyond.”

Each year, the US-UK Fulbright Commission supports up to 60 U.S. first- and second-year undergraduate students to undertake a demanding academic and cultural summer program at leading institutions in the UK. The Commission selects participants through a rigorous application and interview process. In making these awards the Commission looks not only for academic excellence but a focused application, a range of extracurricular and community activities, demonstrated ambassadorial skills, a desire to further the Fulbright Program and a plan to give back to the recipient’s home country upon returning.

The US-UK Fulbright Commission was created by treaty on September 22, 1948 and is part of the Fulbright Program conceived by Senator J. William Fulbright in the aftermath of World War II to promote leadership, learning and empathy between nations through educational exchange. The Commission’s programs are funded by a range of partners including leading U.S. and UK universities, charities and both governments

Penny Egan CBE, Executive Director of the US-UK Fulbright Commission, said, “As we celebrate the US-UK Fulbright Commission’s 70th Anniversary year, we are so proud of what our programs have achieved, the number of Americans and Brits who have benefitted from educational exchange and of the ‘special relationship’ that we continue to renew and strengthen. The Summer Institutes provide students with a great opportunity to experience the UK higher education system, immerse themselves in British culture and further develop intercultural understanding between our two countries.”