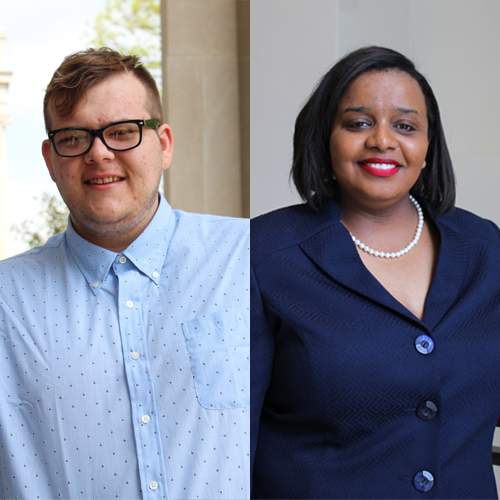 Photo Caption: Erick Murrer (left) is the first WKU student to receive a Pickering Fellowship.  Isabella Greene (right) was selected as an alternate.

Honoring the distinguished service of Ambassador Pickering, the fellowship is the premier graduate fellowship for students pursuing a career in the U.S. foreign service.  Fellows receive $37,500 annually for a two-year graduate degree in a subject related to the foreign service, paid summer internships in Washington, D.C. and at embassies abroad, and numerous opportunities for mentoring and professional development.

Pickering Fellows commit to working as foreign service officers for at least five years after they receive their graduate degrees.  They have guaranteed entry into the U.S. foreign service.

Murrer, a fourth-year economics and Chinese major, plans to work as an economic officer in the U.S. foreign service.  They have pursued numerous opportunities with the U.S. Department of State while at WKU.  They were previously selected as a U.S. foreign service intern through which they worked on global LGBTQ issues in the Bureau of Democracy, Human Rights, and Labor.  Murrer said that they are grateful to receive the fellowship as a low income, LGBTQ individual from Appalachia.

“Receiving the Pickering Fellowship is an absolutely life changing experience, and I am so excited to continue to work in the U.S. Department of State,” Murrer said.

Greene, a 2016 graduate in Chinese, history, and Asian religions and cultures, was recognized as an alternate.  While at WKU, Greene studied abroad in Beijing, China, worked as a student advisor in the Office of Study Abroad and Global Learning and continues to serve as an alumni ambassador for U.S.-China Strong, an initiative to increase the number of students learning Chinese.

“For WKU to have both a winner and an alternate in one year speaks very highly of the quality of students at WKU and the opportunities this university is affording them for their personal and intellectual development,” Michael McClellan, WKU Diplomat-in-Residence, said. “Having worked closely with Ambassador Pickering in Russia, I know that Erick and Isabella embody the high professional standards and intellectual acumen that Ambassador Pickering represents and that this Fellowship demands.”

Murrer and Greene sought guidance from Cory Dodds, coordinator of nationally competitive opportunities in the Office of Scholar Development, and McClellan while preparing for the Pickering competition.

“Without the help of the Office of Scholar Development and Mr. McClellan, I would not have been as thoroughly prepped or have as refined understanding of the selection process itself,” Murrer said. “I strongly recommend anyone wanting to have a career at the State Department to consult OSD.”